So I know I was originally supposed to finish off the sprinter versus marathoner series today but then it dawned on me that it’s been one year since I wrote perhaps my most inspired training article where I gave away the Ultimate Training Secret of the Illuminatty (for which I am now in constant danger of repercussions).  And that means that I need to do a followup (inasmuch as I can ever follow that bit of brilliance).  So today I present you with some less well known Weider Principles.

Who is Joe Weider?

For some history, Joe Weider is usually considered to be the father of modern bodybuilding.  Through his magazines (such as Flex and Muscle and Fitness) and Arnold, he truly brought bodybuilding into the mainstream in a way that it simply hadn’t been up to that point.

Previously seen as a niche activity for narcissistic idiots (who’s sexuality was questioned in that they liked to primp around in tights covered in baby oil), bodybuilding became mainstream and fairly well accepted. 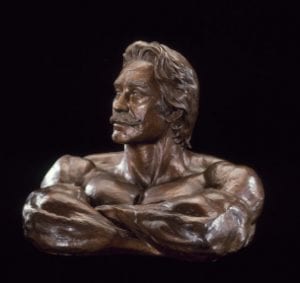 Fun fact: while that is Joe Weider’s face, they put it on Robby Robinson’s body.  FFS.

If it could be or had been done in the gym, it had the words Weider and Principle stapled onto it (and it wouldn’t surprise me if he trademarked the thing).

Anyhow, today (please check the date) I want to present some of the less well-known Weider Principles that I observed in the gym on a fairly regular basis.

The Slam the Plates onto the Bar Weider Principle

This only works if you’re putting more than one plate (and by plate here I mean a 45 lb plate since nothing else counts) on the bar of course.  But it describes the approach of making sure to slam the plate onto the bar/onto the plates already on there so that it clangs really loudly.

If you ask a trainee why they will do this, they will tell you that it’s to ensure that the plates are completely tight on the bar for maximum stability but the real reason everybody does this is to get people to look over to see how many plates you have on the bar.  You do it, I do it, we all do it.

Repeated to the above (which is just a pre-set attention driver) I know everyone reading this has experienced the Weider Screaming Principle.  This, of course, refers to the guys who feels the need to scream at the top of his lungs throughout his set.  A similar principle was one I experienced in Salt Lake City where one particularly big bodybuilder would literally growl (think Batman in the Nolan movies) through every set “Wonnnnn, twwwooo, yeahhh, threee.”  I don’t know how his throat took it since this would go on for about 2 hours without a break.

Now it’s actually been scientifically shown (citation needed) that muscles have sound receptors and can be quite literally “scared” into growth.  You’ve heard of shocking the system?  Well this can refer to weight, intensity, volume, exercise variety or SHEER DECIBLES.  Don’t just train your muscles, threaten them verbally to grow.

The Weider Screaming Principle has another primary effect which is to get everybody in the gym’s attention so that they can see how amazing you are.  This ties in with the FAPPing principle from last year’s article.  Training is only maximally anabolic if other people know how awesome you are.  So it’s critical that you get as many people in the gym looking at you while you lift.  Screaming on every rep gets that done (or just makes real lifters think you’re a complete idiot).

If you have training partners, make sure to get them to get into it.  They should be screaming “C’MON BRO!  YOU GOT THIS, BRO.  LIGHT WEIGHT!” and slapping as you scream either before or during the set.  Maximal attention and decibles are synergistic.

To be honest, the Weider Screaming Principle can be more generally described as the Weider Noise Hypertrophy Principle and there are other ways to employ it.  On deadlifts, for example, make sure to just absolutely drop/slam the weights on the floor.  Nothing scares muscles into growth more than that metal hitting the floor (and of course scream every time you lift the weight).

You can do the same on weight stack machines.  Scream on every lift, let the weights slam as loudly as possibly on every lowering. AHHHH!!!! SLAM!!!!! AHHHHH!!!! SLAM!!  This is how you grow.  With dumbbell movements, make sure to drop the ‘bells from as high as possible so they make the most amount of noise possible when they hit the floor.  Don’t worry about damaging the equipment of course, the gym will pay to replace it.  It’s not your problem.

This could be more generally called the Add Weight Cut ROM Principle but since it’s typically seen on squats and leg presses, I’m using depth.  It’s not unheard of on other exercises but squats is where it happens.  Everyone has seen this.  A guy will start squatting and his first set will be this beautiful full range set with 135 on the bar (60kg for you metric heathens).

Every set he’ll add 45 lbs to each side and the depth will get less and less and less.  By the time he’s got 405 (it’s like 180kg or something, don’t make me do math) on the bar he’s doing maybe a 1/8th squat if that.  Ask him and he’s sure he’s still at full depth.     Leg presses are even better for this since you can load double or triple the plates as you progressively cut depth to the slightest of knee bends.

Again, you can see this on other movements, bench is fairly common.  But since full range on bench is pretty well defined (bar on chest), it’s a lot less likely to convince yourself you’re at depth when you’re barely bending your knees.

This can combine with the previous principles.  At 135 you neither slam the plates or scream since nobody cares about some dude squatting 135.  Girls can do that.  With every plate slammed on the bar to get attention before the set, you start making relatively more noise.  By the time you get to your maximum weight/minimal depth set, you should be slamming plates to get attention, having your training partners (if available) screaming and then screaming like a banshee during every (partial rep).

The ultimate culmination of the above is a principle that should only be used by advanced trainees since it combines all of the above principles into one maximal effect set.  This can work by itself or serve as the last set where you have been slamming plates and screaming (and cutting range of motion if applicable) more loudly.

And this principle describes the approach of loading the bar up with as many 45’s as you can find, will fit on the bar.  Slam every one.  Make sure everyone sees you doing it so they can wonder how you can possibly lift all that weight.  Now you get psyched. Start storming around making louder noises, getting psyched, have your training partners help.  Maximum attention.  MAXIMUM DECIBLES.

Then once you have achieved maximum attention and maximum decibles, decide that today is not the day to be this amazing.  And don’t actually do the set.   Or maybe start to set up under the bar (squats) or look like you’re about to get the handoff on bench.  But as soon as everyone stops watching, just walk away from the weight.   If you’ve never seen this one used, find a new gym, yours sucks and is filled with noobs.  This is the pinnacle of training quality.  And it must be capped off by the final principle.

The Leave All Your Weights on the Bar Weider Principle

Once you have spent all that time slamming plates, making noise and maybe or maybe not actually lifting the heaviest weight you loaded, the next principle that is usually applied is to leave every plate on the bar or machine you just used.  4 wheels per side on squats?  Go for it.

8+ wheels per side on the leg press?  Absolutely.  More generally this is the Weider Leave Your Shit All Over the Gym Principle.  Why should you unload your deadlift bar or put your dumbbells back?  Just leave that bar loaded, leave those weights all over the floor.

Only suckers waste energy unloading plates or putting their weight away and that’s energy that can go into your next half-assed set or sets.   So make sure and be the most selfish ass you can be by just leaving them all on the bar for either the gym staff or the next person to unload or carry back to the weight rack where they belong.  It’s not your gym so it’s not your problem.

Even if you did have the energy to rerack your plates, you don’t have time since you should be taking a selfie for Facebook for maximal FAPPing effects.