Having finished the discussion of maximal strength training methods in Categories of Weight Training: Part 9, I want to move into a topic that may not have much relevance to many of my readers.  That topic is power training, exercises meant to increase muscular power.

To discuss power training methods, I’m going to first need to bore you with a few concepts that you may or may not be familiar with (depending on your background and what kinds of things you generally read) including Rate of Force Development and the physics definition of power. I’ll wind up today by looking at the first loading parameter for power training which is intensity as that will set me up to (hopefully) finish up in the next piece.

So let’s move on to actual power training methods, what types of training actually improves power, RFD, etc.  To deal with that I need to bore you with a return to high school physics since I first need to define power in at least general terms (if for no other reason than to distinguish it from Real Ultimate Power).  And that physics definition is as follows

Where P is power, W is work  (which is further defined as force times distance) and t is time.  And I’ll spare you the units since it’s not really relevant and I’m not going to do any math.   Power is a measure how much force you apply over a given distance and how quickly you do it.

So imagine that you’re doing, say, a bench press.  The bar is loaded with 100kg (225 pounds for the metrically impaired) which will require some amount of force to lift and your bench press stroke is 0.6 m (about 24 inches).   The work performed will be the force you generate times that distance. How much power your produce will depend on how quickly you make the lift.

Now, if you doubled the weight on the bar but still lifted it in one second, that would also require twice the power since the force requirement would go up.   If you found some weird way to lift the same weight over twice the distance (which is usually not possible for most weight room activities but I guess if you wanted to compare the deadlift versus the clean or something) in the same time, that would also double the power.  Don’t read any of this as recommendations on how to impact on power production, I’m just explaining the equation to you conceptually (and boringly).

Again, power brings in the issue of time with higher speed movements generally generating higher power than slower speed movements.  Although force requirements are also relevant here (since it’s usually difficult or impossible to change the distance that your bodyparts travel for any given exercise, distance isn’t usually modifiable so it’s best to focus on force and time).

Assuming the same distance travelled, moving a light weight very quickly may generate less power than moving a heavier weight more slowly. It just depends on how much the numbers change (if adding 20% to the bar slows down your movement by 30% you may get less power output than lifting a lighter weight but moving faster).

And without getting into a bunch of boring math and stuff, let’s just jump to the real-world conclusion: as it turns out you usually find that power output is maximized somewhere between the two extremes of heavy weight/slow speed movements (i.e. maximal weight lifting) and light weight/very high speed movements (unloaded movements).

In that vein, powerlifting is actually poorly named in that the movements, usually heavy weights lifted over fairly short distances at a slow speed generates relatively low power outputs.  Strengthlifting would be more accurate.  In contrast the snatch (where a heavy bar is taken from floor to overhead in a tiny amount of time) generates/required one of the higher power outputs measured (because of the distance covered and the extreme quickness with which the movement occurs).

In any case, the relationship between force, velocity and power output is shown below.  Note how power output peaks in roughly the middle (where force and velocity are both average) and drops off at the extremes of high force/slow speed and low force/high speed. 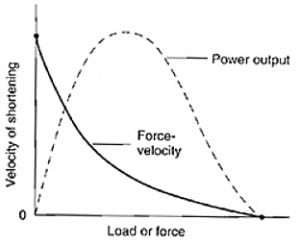 The key point of this is that, with very few exceptions, muscular power, the ability to generate force rapidly is a critical component of sporting success.  That brings me to the next important concept.

I’ve mentioned a number of times in this series that for most athletes, being able to generate force rapidly is far more important than slow strength per se (there are a few exceptions of which powerlifting is a major one).  For most sports, athletes tend have around 0.1-0.2 seconds to generate force (this is true for sprinting, the push in speed skating, for all kinds of jumpers, etc.).  How much force they can generate given longer time periods doesn’t really matter.

For this reason scientists started to talk about Rate of Force Development (RFD) which is exactly what it sounds like, how quickly force can be generated (there are other concepts such as starting and acceleration strength that I’m not going to get into, get Supertraining if you really care).  Conceptually, RFD is just a measure of how much force can be generated quickly.

So I want you to think of three hypothetical athletes.  Athlete A is Paul the Powerlifter, he can generate a certain amount of force but is fairly slow in that force production, let’s say it takes him 1.5 seconds to reach his maximum force output.  Athlete B is Oliver the Olympic Lifter.  As it turns out, given 1.5 seconds he can generate the identical amount of force as Paul but he can also generate more force quickly due to his explosive training.

Athlete C is Sam the sprinter. While he doesn’t have the same slow force output as Paul or Oliver in terms of his force at 1.5 seconds he can generate higher forces than either of them in the 0.1-0.2 seconds I’m using as a cutoff for most sports.  Our three hypothetical athletes are shown in the figure below.

Here’s what it means.  If we are looking at an activity where 1.5 seconds or more is allowed to generate force, Athletes A and B will be identical,  Both generate the same arbitrary force at that time point (assume it levels out past that).  But they will both beat Athlete C who doesn’t have the same high force output at 1.5 seconds.

However, if we look at most sporting activities that rely on forces applied quickly, Athlete B will beat Athlete A.  Although their maximums at 1.5 seconds are the same, Athlete B has a higher RFD and generates higher forces at 0.2 seconds.  However Athlete C, despite his lower maximal strength output is still going to beat either of them.  At the 0.2 second mark he’s generating more force than either.  He generates high forces very quickly but then hits a plateau.  Giving him longer doesn’t add to his force output but it doesn’t matter (this is also somewhat unrealistic in the real world).

And I’m not saying that this is automatically the case, that a weaker athlete will or even can have higher force production quickly.   Instead, this is just to illustrate the point I’m trying to make which is that, given the requirements of most sports, it’s not slow maximum strength that determines performance; rather it’s the ability to generate high forces rapidly.

So that’s RFD and why it’s important.  Which brings us to the next topic.

.So with that background it should be fairly clear that the goal of power training is, in general anyhow, to teach the body/athlete to generate forces rapidly (again, I’m not getting into the specifics of starting strength, acceleration strength, etc here).

I’d note again that, up to a point anyhow, maximal strength/force output still acts as a “base” for power production because, in general, if you can’t generate a certain level of force slowly, you certainly can’t generate that force quickly.    But once that certain level of maximal strength is present, performance in most sports tends to hinge on power production: how much force an athlete can produce quickly.  And that’s usually the population that the training methods I’m going to talk about have the most relevance too: athletes involved in performance sports requiring high force output in short periods of time.

But what about other training populations?  To be honest, I see almost zero relevance of power training methods for physique oriented individuals.  I just don’t see it having any real benefit or purpose.  Certainly power training methods can require high forces and muscular tensions but this is often offset by the very short time periods (decreasing any fatigue stimulus).  As well, many traditional weight training movements are problematic to use for power training which further limits their use (unless modifications such as bands or chains are used).  This is a topic I’ll come back to.

For the general public I see even less relevance of these types of training methods although it’s worth noting that some recent work indicates a decrease in skeletal muscle power being part of the loss of function seen in the elderly.  But there you get into a whole host of other issues in terms of injury risk, trainability, etc. that I’m simply not that qualified to talk about.

Having an older trainee without a major fitness base use the kinds of methods I’m going to talk about seems a recipe for disaster (and again note that increasing maximal strength tends to improve power to at least some degree; at least when strength levels are fairly low) unless simpler, less technically demanding movements are used.

So for the most part, the power training methods I want to talk about are mostly for performance athletes.  Again, I don’t suspect that that makes up the major readership of my site; at this point I’m just trying to make this series comprehensive so I don’t ever have to write any of it ever again.

And all of that background brings us to the first loading parameters which is intensity of load (in terms of load on the bar/percentage of maximum force output).  Now, about a zillion (±a million) and one studies have been done and, depending on the population studied, the exercise used and a host of other variables, maximal power outputs are typically seen in a range from about 30% of 1RM to ~60/70% 1RM or thereabouts.  The snatch actually falls in about this range relative to maximum strength levels which is why it or its variants are often used as speed-strength training.

As the weight gets much heavier than 70% or so, speed of movement starts to slow down and power outputs drop.  As load drops below 30% the load is too low despite the increased speed of movement (note that human movement speed is limited and can only increase so far no matter how light the load).

So that’s the working range for power training: 30-70% of 1RM.  Of course, that’s a pretty big range of loading and if you imagined that different things might be done at those different loadings or even that different adaptations might occur (in the same way hypertrophy training at 60% is probably a little different than training at 80%), then you’d be right.  Which is actually as good a place as any to cut this for today.

Ok, now that this series has gone completely off the rails as I seem intent on adding more and more...