Continuing from my discussion of the trite idea of that you should train like an athlete to look like an athlete, I want to look at one of the continually recurring ideas in the field.  Specifically this asinine idea that the specific physiques of either sprinters or marathoners/endurance athletes are indicative of the effects their training has.

My point from last time was this:

I finished by pointing out that usually when you see people argue to “Train like an athlete to look like an athlete” the body type they hold up is that of a track/100m sprinter.  Perhaps more accurately, one of the sillier ideas to come around since high-intensity interval training (HIIT) became THE type of training that everyone should be doing, is to draw a comparison between the physiques of a track sprinter and a marathoner or ask “Which would you rather look like?”

Usually a picture is shown with a BIG African American sprinter (tho I get the impression that the guy typically used is actually a football player since he’s far larger than most sprinters) compared to a scrawny white marathoner.  I won’t even post the picture that is typically used but I imagine most have seen it.

A related argument is that “Have you ever seen a fat sprinter?” or the alternate “You can finish a marathon and be fat.” which I suppose is meant to mean that the sprint/HIIT makes you lean and distance training doesn’t.  Except that it’s a stupid comparison.

No elite marathoner is fat just as no elite endurance athlete of any sort is usually fat.  Sure, recreational runners and cyclists often are but you cannot compare an elite sprinter to a recreational marathoner meaningfully.    Well you can but you’re making a stunning fallacy in doing so.

It’s like the occasionally made argument that “A lot of people who do endless cardio are fat.” to suggest that it doesn’t work for fat loss.  Which is no different than arguing that since there are small, fat weak guys in the weight room weight training doesn’t work to improve physique.

I mean, seriously, go to your weight room right now.  You’ll see lots of out of shape people or big strong fat guys lifiting weights.  Weight training doesn’t magically make you lean and jacked any more than cardio makes you lean.  Yet this “argument” is only applied to one of them.

And the only real reason you don’t see fat sprinters is that most don’t get into track and field recreationally.   Yes, fine I’m sure there are some and there is a master’s competition circuit (and I bet those athletes look NOTHING like elite sprinters) but it’s got nowhere near the interest for the general exerciser as the marathon or riding a bike.  And you don’t see pictures of them on the news.

People don’t go run the 400m for fun but they may jog/run or cycle.  So of course you see out of shape people doing them.  They just don’t do them very well.  There is no guarantee that any type of training will make you lean if you eat too much.  But there is not that much of a recreational/citizen track and field type of sport.

I’m sure it exists but it doesn’t have nearly the pull of marathons and such.  People LOVE to get a t-shirt for finishing a marathon but finishing in 4+ hours is not running a 2:10.  But when most of those runners are recreational types, of course you get folks who aren’t in elite running shape.

Can You Identify the Sprinter Versus Endurance Athlete?

In any case, since this idea is still kicking around and I see it from time to time, I want to address it yet again.  And hopefully for the last time because it’s a very dumb idea that needs to die (I’ll put the final nail in the coffin next week).  To start this off, below I’ve put together a collage of 4 different athletes. 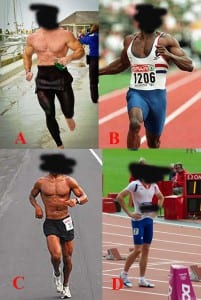 Two perform in endurance sports and two are track sprinters.  Without reverse Google image searching it, see if you can identify which person is involved in which sport (unfortunately the backgrounds kind of give it away).  Here are the answers.

A is Alex Viada a well-known lifter and endurance runner who has squatted over 700, runs a 5′ mile and competed in endless endurance events.  He is lean and muscular.  He’s even written a book called The Hybrid Athlete which talks about how to combine weight training and endurance training in a logical fashion.

C is David Goggins an Ex-Army Ranger who competes in marathons and ultraendurance events for charity.  He is lean and muscular despite the durations of the races he does.

D is Christopher Lemaitre the only white sprinter to ever break 10 seconds flat in the 100m though not by much.  He is lean and, at best, lightly muscled relatively speaking.  He doesn’t have the physique of either of the other three athletes or even a successful lighter weight bodybuilder.  You can absolutely find guys in your gym who have more muscle than him.

What Explains The Difference Here?

Hmm, that’s interesting now isn’t it?  We’ve got two endurance athletes who are jacked as hell (and extremely lean) and one track sprinter who is, at best, lightly muscled despite being the fastest white sprinter in the history of the sport.  And we have one top sprinter with the classic “sprinter” physque.

It’s almost as if, contrary to what is argued, the sport itself (or certainly not sprint training per se) isn’t what’s generating the physiques.  The endurance guys aren’t scrawny and one of the sprinters isn’t jacked as hell despite performing at the highest level.

So we might ask why didn’t his sprint training build him the physique that is always attributed to sprinters?   Or alternately we might ask what commonalities the three jacked guys share that the non-jacked guy doesn’t.   And the primary commonality is weight training.  That’s really it.

Lemaitre apparently doesn’t weight train, or hasn’t traditionally which not only raises issues of why he’s as good as he is but points out that without weight training, sprint training doesn’t do much of jack for building the physique.  Yeah, fine, he’s in shape.  But that’s about it.   I’ve seen joggers in my neighborhood who were way more muscular.  Probably because they lift and he doesn’t.

To that I might add that the best 100m sprinters are always African American (and all world record holders can actually track their genetics back to a single town in Jamaica).  This isn’t meant to be racist but is just a statement of fact.

If you find pictures of the top African American sprinters when they were younger, they invariably have the base physique that they developed into as they matured.  Lean, muscular they just got bigger as the training (weight training) further developed the physique that predisposed them to success in the first place.

And the reason that marathoners and other endurance athletes don’t typically carry much muscle is because they don’t weight train and deliberately diet to bring their weights down to low levels since it improves performance.

The Kenyans, the best distance runners in the world, are notoriously weak and the only even remotely strength related work they get is running up and down hills since it’s actually specific to their sport.  But weight training isn’t that important for their sport and carrying excess muscle mass would be detrimental.  They also start out tall and lanky and deliberately bring their weight down for competition.

When heavy weight training is done, as clearly shown in the pictures of Alex and Goggins, muscle mass can not only be developed but develop significantly.  To paraphrase the great philosopher Spike Lee “It’s the weights, Mars.”

And that’s the bottom line.  100m sprinters are generally jacked because

And most elite marathoners are not muscular because

But it’s not the sprint training or the marathon/endurance training per se that is the issue.  Rather it’s the relative presence or absence of weight training that is.

A sprinter who doesn’t lift weights ends up looking like Lemaitre.  And clearly Viada and Goggins show that you can be a great endurance athlete and stay jacked so long as you lift.

Sprinter Versus Endurance Athlete Drug Use

Ok, don’t read this wrong, I am in NO WAY accusing the people above as drug users.  Let me say that again, I am NOT accusing the people in that picture of drug use.  However, in elite sport the reality is that drugs have been part of it since the 70’s if not earlier.  And the fact is that sprinters and endurance athletes use different drugs. This can’t simply be ignored in the physique development.

Due to the strength/power and muscularity requirements for sprinting, the typical drugs used are anabolic steroids.  Assuredly other ancillaries are used but those are the primary focus.  They increase strength, recovery, muscle mass, build muscle without training and do help more than a little.

In contrast, while low dose anabolics may be used by endurance athletes in some sports (cyclists have been caught using fairly low doses of quick acting compounds but that’s more to stave off the huge drop in testosterone that occurs during long tours) EPO is the big drug here.  It increases hematocrit and increases O2 uptake but doesn’t do much for physique except maybe to make you veiny as hell.  Cyclists also starve the shit out of themselves for the big races because being lighter helps in the mountains.

You would expect sprinters to be more jacked than endurance athletes for this reason alone.  But it still has nothing to do with the training per se.

There is another aspect of this entire comparison/argument that I have always found very silly which is that to compare doing a few hours of low intensity aerobic work per week to the training of a marathoner or high-level endurance athlete is stupid.

A marathoner may run 120 miles per week, 20 hours or more and Kenyans are known to run 3-4 times PER DAY.  Long distance cyclists train 4-6 hours per day.  And this is on top of everything else I’ve talked about.  And this has exactly nothing to do with someone doing general aerobic training for fat loss.

Even someone doing an hour every day is doing roughly 3-6 times less than a high-level endurance athlete.  Which also leaves plenty of room for proper weight training (which is what will have the largest impact on muscle mass).

And to compare that to “sprint” training is not only asinine but is a case of excluding the middle.  It pretends that there are only two options which are nothing but HIIT or endless endurance training and that’s just stupid.  Logically, you can do both in some form or combaintion  and turning it into an either/or is simplistic and wrong.

But fundamentally basic cardiovascular training isn’t the same as endurance performance training which makes that particularly comparison dumb as hell.  Similarly neither is the type of high-intensity interval training (HIIT) that usually comes along with this stupid comparison actual sprint training in the first place.

But even that brings up a different problem which is this:

None of the people sharing this meme or making this argument have the first clue what actual sprint training is.