Getting Started in the Weights Game

The year was 1985 or so and I had begged my mom for a membership to the local Nautilus gym in town.  That Christmas I got it.  This was in the heyday of Nautilus (and step aerobics on concrete floors I might add), they had all the original machines that you could work through circuit style.

But as gyms of that type were wont to do, it also had a small free weight area.  This was pretty ancient stuff, the old style bench presses where the uprights were way too close together and made it really easy to tip the bar over if you didn’t put it back just right.  I’m sure older readers know what I’m talking about.  Kids today don’t know how good they’ve got it.

I honestly don’t remember anything that the guy told me except for the one thing I want to talk about in this article.  It’s a piece of advice that resonated for some reason and that I still adhere to to this day 25 years later.  Quite in fact, I force this particular habit on every lifter I work with until I get them doing it too.

Keep the Power Inside the Bar

Here’s the singular thing I remember him telling me:

When you lift weights, always keep the carved part of the plates facing in, that keeps the power inside the bar.

And clearly if the goal is to get stronger or bigger, you want all of the power inside the bar.

Now, that may not even make sense given the types of plates available in many commercial gyms these days but standard 45 pound plates generally have a carved side (the bit that is hollowed out) and a completely smooth side.  Like what’s in the picture below, he was saying to always face the carved bits towards one another to trap the power inside the bar. 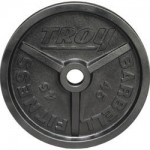 Of course, I suppose it’s possible that he meant to face both smooth sides towards one another but that’s not what I remember and that’s certainly not what I do or teach.  As well, see how the carved side of the plate has all kinds of edges and lips? That traps the power because the power pools behind the lip.  Power can leak over the smooth side of the plate.  So it’s carved side in to trap the power.

There is simply no room for debate.

And while he may not have explicitly said it, I always read the piece of advice as saying that every plate that you loaded (assuming you loaded more than one) should have the carved pieces faced in. Of course, any powerlifters or Olympic lifters reading this will know that’s absurd: in those sports, only the most inside plate faces in, the other plates face out (so that the judges can better see what’s on the bar).  Most bumpers are identical on both sides anyhow.  It’s amazing that those guys can lift at all with all of that power loss.

As well, most lifters will counter that the real reason you face plates in is that it’s easier to pull the plates off the bar since you can grab the edge with your fingers.  To this I say NONSENSE!

Facing the plates in keeps the power inside the bar.

But with that said, this was something I always did.  I have been known to unload entire leg presses to face every plate facing inside (making the annoying habit of other lifters not unloading machines doubly annoying; since few share my neurosis, I often have to unload a lot of plates to get them all facing in).

I am pathological about it and, as noted, I make all lifters I train do it too.

I even tell them why, it’s to keep the power inside the bar.

I’d note that this goes for small plates too.  If you’re loading a 45 a 10 and a 5 on a machine or bar, they all face in towards the set on the other side.  One trainee of mine, mainly to aggravate me, would try to face a plate out on one side of the machine. If I noticed, I would go flip the plate so that they all faced in.  I’d note that I think this causes an even worse assymmetrical power leak.  The energy is capped on one side and squirts out the other side.    This may cause bilateral strength or size imbalances as I think about it now, one side of the body has more power than the other.

I’m not joking about the above in any way, for the record (well, probably the bit about strength imbalances is me kidding).  Anyone who’s trained with me will vouch.

Years later, I moved to Austin and had a training partner who was, shall we say, as much of a smart ass as I am.  I introduced him to this idea and he ran with it.  We had many lively debates about various topics related to this.

For example, neither of us cared for the plates with the handles in them.  Not only are they identical on both sides (they don’t have a side to ‘face’ towards one another) but they have those big old holes in the plate that just leak power like crazy.  That’s ignoring that many of those types of plates have corners (so they won’t roll) which makes deadlifting impossible; here I’m concerned here only with power leaks. 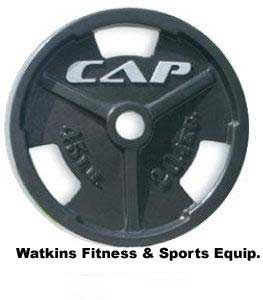 Our gym actually had a mix of those types and normal, non-energy leaking carved plates.  We had many debates about whether or not you could “trap” the energy leak by putting a normal plate over the top of the plates with handles in them.  We figured that, yes, a 45 lb correct plate could be put over one of the ones with handles in it to block the power leak.  You still had to put the carved side in, of course.

In a related vein, could a small plate that was carved (e.g. a 10 lb plate with no holes in the edges) cover the energy leak that a 45 lb plate with handles generated?  Was this as much a conceptual as a physical power leak?  I don’t think we ever came to a firm conclusion but we did it anyhow: if we had to load plates with handles in them but weren’t going heavy enough to put on a proper 45 to block the leak, we’d cap it with a smaller plate that was carved without holes.  It couldn’t hurt.

The  seated calf raise raised (ha ha) more questions: since it only has the single plate loading pin, we figured that you had to face the bottommost plate up and then cap it with a proper plate facing down.  Or at least a small plate that was properly carved or something.

I think you get the idea of that kind of silliness we were involved in; but let’s face it, you gotta do something during rest intervals.  This was one of our many running debates.

Keeping the Power Inside the Bar

Of course, eventually I left Austin for Salt Lake City but I still train this way to this very day.  I imagine I’ll do this until I either stop training or gyms stop having normal plates without holes in them.  The power must stay within the bar.

Anyone I train learns to do it too.  Early in my skating career, one of my coach’s other skaters had plates facing every which way on the leg press and I told him “I can’t watch this.” and left the room until she was done.  He thought I was concerned about injury.  Nope, I couldn’t handle watching the lifter waste the set because of power leaks.  That was probably one of his first indications that he was dealing with a madman.

So am I just nuts or does this article have an actual point?   Shockingly, it is the latter and I’m not just being silly, I have a real point to make about training.

Belief is a strong thing and athletes of all calibers often develop a lot of weird habits and superstitions that they swear are required for them to perform optimally.  It might be a pair of socks or a particular pre-workout ritual or what have you.  As a singular example, Speed Skating Gold Medalist Derek Parra wrote in his book that before his first great race he ate an entire sleeve of Fig Newtons, from that point on he always ate an entire sleeve the night before a race.  He had found his mojo and athletes know that you don’t mess with good mojo.

It’s a belief thing, call it voodoo or placebo but, here’s the thing: if a placebo effect makes you perform better, is it really a placebo?  If it makes someone perform better or more consistently, that’s all that matters even if, at face value, it seems insane.

Of course, that’s really just my attempt to provide a pseudo-physiological rationalization to this particular habit.

The truth is that I know deep down that facing the plates in DOES keep the power inside the bar and that it makes me stronger to train that way.  There’s a message hidden in that statement too if you look close enough.

Try it, it works.

Note: This piece was originally posted on April 1st.  So chill out.

32 thoughts on “Keeping the Power Inside the Bar”