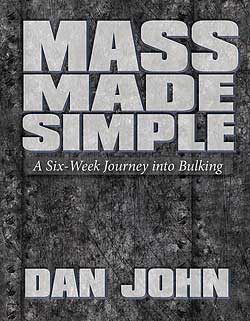 In a previous site update, I did a review of Dan John’s Never Let Go, effectively a collection of articles he had written talking about his various and sundry experiences in the weight game.

It’s still a book I highly recommend, if not for the training wisdom it contains then for its highly entertaining and readable style.  I reread it about once a year and something in it always manages to make me chuckle or think.

As a collection of articles there wasn’t really any single theme that ran through it except for perhaps the fact that Dan is as old as the hills and has truly seen it and done it all when it comes to the weight room.

I mean, I’m fairly sure Dan was the guy who pointed Milo at the bull and told him to get cracking.  Hell, Dan might have been the bull.  For those who have truly been living under a rock, as the story goes, Milo lifted a bull on a daily basis.

And as the bull grew and got heavier, Milo was forced to get stronger; this was the supposed invention of progressive overload. Which is all just a really really torturous segue to talking about weight gain, bulking in specific, and Dan John.  Because, as the cover picture  to the left of this really silly text clearly shows, that’s what Dan’s new book is about: bulking and gaining mass.

Mass Made Simple: A Simple Approach to Gaining Mass

And in contrast to Never Let Go, this is a book with a single theme running through it.  And that theme, again, is gaining muscle mass.  And as you might also have inferred from the title, it’s done based on a simple approach to both training and diet.  Because, in a nutshell, that’s what Dan is about.  After about a million (give or take just under a million) years doing things, Dan has distilled the essence of many types of training down into their simplest form.

Because this isn’t a book from MuscleMag International, it’s a book by Dan John.  And, like I said, Dan John is about simple.  And in his own inimitable writing style (I’d say he is this generations John McCallum but I’m fairly sure Dan is an immortal and taught McCallum to lift) Dan lays out a simple program of training and eating for mass-building.  If that’s the kind of book on gaining mass you’re interested in, this is the book you’re looking for.

Because after a fairly basic introduction (and you can actually find something akin to an excerpt from the book by googling”‘Mass Made Simple”) to the topic of gaining mass, Dan lays it out.  The first thing he lays out is a six week “break-in” to teach people how to squat.

As you guessed, his mass training program is based around squatting.  And if you can’t squat properly, you can’t do the program.  The progression is logical and, well, progressive.  He probably could have sold it as a separate e-book or bonus if he’d wanted.

Next up is diet, a basic look at mass gaining nutrition. Rather you’ll find a basic list of dietary ‘rules’ and strategies to eat for mass.  Simple, basic, to the point.  More importantly, hard to screw up although I’m sure he’ll get amusing emails by people who did just that.  After that Dan lays out the basic 6 week cycle in terms of when you’ll train, when you’ll rest and when you’ll, as he puts it ‘recharge’. No, I won’t explain, go buy the book.

After that you’ll get a series of nutritional tweaks, things that you are to change (usually adding) to your dietary intake as the program marches on.  By adding things one at a time in a systematic and logical way, not only do you keep things from getting overwhelming, you can tell what’s working and what isn’t.  Dan is no dogmatist here, if a strategy works, you keep it.  If it doesn’t you throw it out.  It’s that simple.

And then after all of that groundwork has been laid (in a mere 56 pages), you get to the bulk of both the book and the program where Dan lays out the overall scheme of the program.  In short it’s based around three components which I will describe:

That’s it.  That’s the bulk/mass-gaining program.  A combination of movements to achieve the above.  And make no mistake this isn’t simply some rehash of the classical 2o-rep squat program as laid out in Super Squats.  Rather Dan recommends weights to use (based on the trainees body weight) and most of the progression is based on sets and reps rather than weight progression.  The entire program has it’s own flavor and when Dan says ‘high-repetition’ he often means it.  One of the workouts is simply called “To fifty”.  I’ll let you wonder what that means.  Again, buy the book if you’re curious and want to suffer.

And the training makes up the remainder of the book. Every workout includes a brief warm-up and the above three components and every workout is laid out in detail in terms of sets, reps and progressions.  Again, rather than being a traditional slog of adding weight in the same repetition range, things are varied at every workout with shifts in volume, reps, sets and loading parameters.

After the full 6-week cycle, there are a couple of additional sections including an addendum on complexes (with credit given to Istvaan “Steve” Javorek) along with what amounts to a Q&A. The book rounds itself out with a complete training diary for recording all of the workouts along with other notes regarding nutritional compliance, etc.

So overall this is a complete program on bulking, almost in the tradition of the old courses. There is no unnecessary complexity and it’s fairly simple: heavy loads plus high repetitions plus food equals growth.  This is what has gotten legions of trainees big in the past and will still work now.  That it’s written in Dan’s entertaining style is just bonus points.

For anyone who wants a fresh (and yet old school) look at mass gaining and bulking, I don’t think you can go wrong with Mass Made Simple.  At a low price point of $19.95 it’s a bargain.

Mass Made Simple by Dan John can be ordered from DaveDraper.com.

Today I'm going to talk about some other stuff that has happened with ALFIE! including me doing my workouts around...