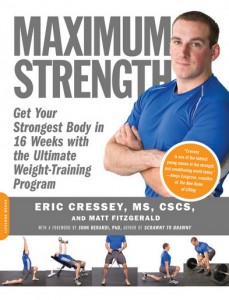 I hadn’t done a product review in a while and Eric was nice enough to send me a copy of his new book so I thought I’d finally sit down and review the thing, having read it last week.

For those of you who aren’t familiar with Eric Cressy, he sort of started as a “rehab/shoulder” guru but has established himself as an overall performance enhancement coach. His articles on shoulder health and posture on T-nation.com are excellent and I’d highly recommend them to anyone with shoulder issues or who is having the types of postural issues endemic to modern society.

You can find links to all of Eric’s articles here. I strongly suggest reading the Neanderthal No More series.

He’s done previous products including Magnificent Mobility (essentially a “catalog” of various warm-up rehabby types of movements, I think it lacked in not showing trainees how to put things together in a coherent routine) along with his Ultimate Off-Season Training Manual e-book. He also did an enormous six hour (more?) presentation with Mike Robertson called Building the Efficient Athlete.   All of Eric’s products can be found here.

But enough introduction, on to the book.

The book is professionally produced and well laid out, this makes sense given that it’s published through a major print house. It has sort of that “Men’s Health” Fitness book type of feel to it, there’s not much more to say about this. It’s a professional quality book.

The pictures in the book are ok, perhaps a little grainy and gray considering but they show what they are meant to show and that’s all that really matters. The overall structure of the book in terms of logic and flow is good.

Now, as Eric comes from a primarily powerlifting background (Eric has a monster deadlift), I think he tends to be a little bit maximum strength-centric, at least in his writings. This certainly showed up in his Ultimate Off-season Training Manual.

And while a current trend in sports performance has been to focus (excessively IMO) on maximal strength, it’s also arguably true that the average trainee (who is usually doing a lot of bodybuilding driven training) has not done much truly maximum strength training work and can certainly benefit from it. Wow, nice run-on sentence from me.

After discussing some basic physiology about strength production and such, Eric gets into the nuts and bolts of his program. Laid out across 16 weeks, the program starts with a series of maximum tests (primarily strength tests with one power test) before launching into the actual program.

It’s divided into four by four week blocks with each having a slightly different focus in terms of approaching maximum strength. A base period is followed by cluster training, followed by a build period into the final peaking phase built around heavy low rep work. This culminates in a retesting day to see how much things have improved.

Each phase is based around a basic four day upper/lower split and the workouts are laid out extremely logically. Generally there is one primary exercise per workout (trained the heaviest) followed by a bit of assistance/supplemental work and some rehab/prehab types of movements. I’ve certainly seen less intelligently set out workouts. Each month varies the workload each week by varying the reps and sets to some degree to change the overall workload.

Perhaps the biggest concern I have with the program is that each month rotates in essentially new movements and the trainee are expected to jump straight into near maximum loads in the first week of performing that new movement. In my experience, anybody but the most advanced trainee needs at least one or more workout reintroducing a new exercise to regain their form and technique before moving into maximum loads. I’m not sure that average intermediate trainee will be able to do what Eric is suggesting without being coached hands on.

Adding to this, having watched altogether too many people in too many commercial gyms over the years, I expect the average trainee to let their form go to shit trying to put weight on the bar in this type of program. But this is really a concern with all un-coached programs, primarily due to the fact that people are impatient assholes and want strength gains to come faster than they actually do. Squats get higher, form gets sloppier, people do all sorts of amazing things to keep putting too much weight on the bar. Again, this is a problem with most training books and I don’t want it to sound like I’m singling out this one.

Regarding the exercises, each is demonstrated with at least two pictures showing the exercise along with a verbal description. This is always a tough one in books like this. Two pictures, even with a good verbal description, can’t really detail the nuances and cues for more complex movements such as deadlifts. On the other, trying to detail every movement, especially when so many are covered, would end up making the book 400 pages long.

Warm-ups, including dynamic mobility type of stuff and some basic foam rolling type stuff are covered as well. I’d honestly say that this is probably the weakest section of the book, no foam rolling movement is demonstrated with more than one picture (generally the starting position) and I’m not sure why they didn’t include a second picture to show what direction/etc the trainee is actually supposed to move in. The verbal descriptions are fairly clear but including a second photo would have been more consistent with the exercise demos and would have shown more of what the trainee is supposed to do.

Additionally, options for metabolic work (based on body type) are also given.

Overall, I think this is a good book. It’s not a great book but it’s not a terrible book either.  I’ve certainly seen worse.

A big question is who the book is actually aimed at or best suited for and, as mentioned above, I think it’s aimed at a rather specific chunk of the training population.

Low repetition maximum effort work as described certainly isn’t a good choice for rank beginners (who need to be learning proper form and tend to benefit from lower loading until they have form down). Trainees with a good deal of maximum strength training probably won’t find much new here either.

However, for the intermediate trainee who has primarily done bodybuilding influenced workouts, and who needs a good introduction to maximal strength methods with good basic workouts laid out for them across a four month span, they could certainly do worse than to purchase this book.

Eric Cressey’s Maximum Strength can be purchased at Amazon.