As I discussed in the first part of this guide, when you know the amounts of fat and lean mass present in the body, you can calculate body fat percentage.   I’ll discuss the different methods available to do this later in the guide.

For the time being let’s assume I have a magic wand which I can wave to determine someones body fat percentage.  With those values let me show you two different body composition calculations that can be done.

First let me show you how to calculate the pounds of fat and lean body mass (LBM) based on your weight and BF%.

I’ve shown the calculations below for a woman weighing 150 lbs at 22% bodyfat.

The same calculation can be done in reverse to determine BF% if total LBM and total fat mass are known.  I’ve shown this below for a woman who is carrying 30 lbs of fat and 120 lbs of LBM.

Mind you, it’s fairly uncommon to have the pounds of fat and LBM without knowing BF%.  Rather, that second calculation can be used to examine a related topic.

How Do Changes in Body Composition Affect Body Fat Percentage?

Since folks usually want to alter their body fat percentage, it’s instructive to look at how changes in either total fat mass or lean body mass will change overall body fat percentage.  I want to look at the situation where our hypothetical athlete either loses pure fat, gains pure muscle, or gains muscle while losing fat.

So let me start with the woman from calculation 1 who weighs 150 lbs at 22% bodyfat with 33 lbs of body fat.

First I’ll look at moderate changes of either a 5 lb gain in LBM or a 5 lb loss of fat with no other change. I’ll also look at what happens if someone gains 5 lbs of LBM while losing 5 lbs of fat (this isn’t common and I’m showing it mainly to make a point). I’ll also look at the extremes of gaining 20 lbs of LBM (roughly a woman’s maximum potential) or losing the same 20 pounds of fat. Finally, just for illustration, I’ll show a 10 lb loss of fat. 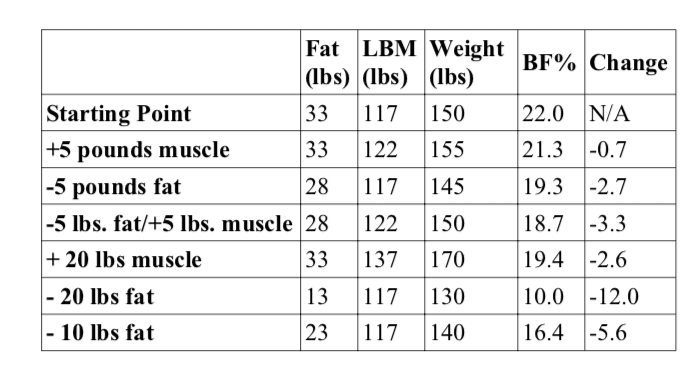 Perhaps the major thing to take from the above chart is that losing fat has an enormously large impact on BF% than gaining the same amount of muscle.  For example, losing 5 lbs of fat lowers BF% by 2.7% while gaining 5 lbs of muscle only lowers it by 0.7%.  Note that doing both at the same time ends up summing the effect of each with a BF% being reduced by 3.3% (2.7% + 0.7% = 3.4%).  Not that this is particularly easy to do.

I bring this up as it’s often recommended that people gain muscle to lower their body fat percentage.  While this is true, it works far less efficiently than losing the same amount of fat.  There is also the issue of the time involved.  Losing 5 pounds of fat can be done much faster than gaining the same 5 pounds of muscle.  When reducing BF% is the goal, losing fat (while maintaining or, hopefully, gaining a small amount of muscle) is the best way.

I’d also note that you don’t have to do the calculations as if pure fat loss or muscle gain is occurring. You can plug any changes you want into the above values to see how varying changes in fat mass and LBM will affect the overall body fat percentage.

A question that comes up quite a bit is how much fat someone will need to lose to reach a certain body fat percentage, given that they know where they are now.  Assuming you have starting numbers for fat mass and total weight, there is a fairly easy calculation to do this.  I’d note that this calculation assumes that the total weight lost is fat mass and that there is no muscle loss.  This isn’t always a good assumption.

So she has to lose 17 pounds of pure fat with zero muscle loss to reach her goal of 12% bodyfat.  This would put her at a (theoretical) finishing weight of 133 lbs (150 lbs – 17 lbs).  I say theoretical since she will have lost some non-muscle LBM such as water on the way down in addition to the potential loss of small amounts of muscle loss.  Her realistic finishing weight might be 10% less than that or closer to 130 lbs.