Of all the muscle groups that bodybuilders focus on, calves have traditionally been one of the most difficult to make grow.  Many even feel that it is the most genetic of muscle groups: you either have them or not.  While there is some truth to this at least some of it comes down to the fact that most people aren’t training the calves effectively.  So let me show you how to do it.

The muscle group referred to as the calves actually include several muscles although most only focus on two: the gastrocnemius and the soleus.  The primary function of these muscles is to act as plantarflexors (pointing the toe) although the gastroc also has very weak knee flexion activity (which is why some people will catch calf cramps on leg curl type movements).

This is also why doing calf work with the knee bent (e.g. seated calf raise) tends to work the soleus preferentially. Since the gastroc crosses the knee, if the knee is bent, the gastroc can’t contribute as significantly to force output.  Put differently, if you do a straight legged calf movement, both the gastroc and soleus get trained, if you do bent-knee work, only the soleus really works. 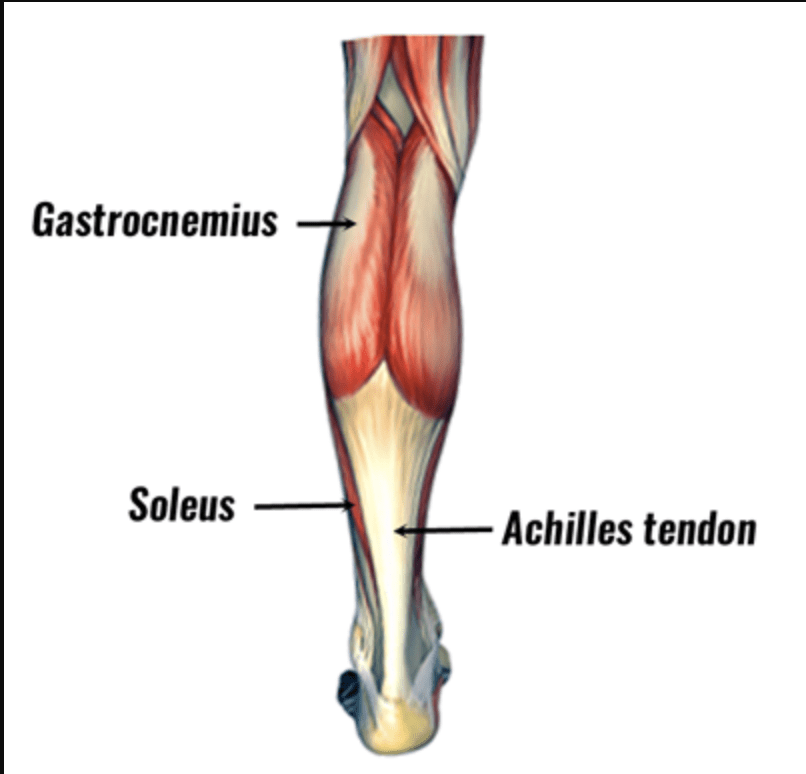 Anatomically, the soleus essentially lies “underneath” the gastroc but both give the calf its distinctive diamond like shape (when developed).   As I sort of alluded to above, the soleus doesn’t cross the knee, the gastroc does (why it can function as a weak knee flexor).

Many people seem to still think that the calf is a primarily slow twitch muscle but this is incorrect.  The gastroc is actually a fast twitch muscle and is involved in explosive type movements.  This is actually part of what is colloquially referred to as Black Man’s Calf Syndrome.

Black bodybuilders have commonly been completely unable to develop calves and the function of the calves is part of why.  High/short calves are excellent for jumping and sprinting but have little potential for growth, they are simply too short.  Black bodybuilders (or white bodybuilders for that matter) who have a short/high gastroc with a long tendon will make fantastic jumpers and sprinters; but great calves they will never have.

In any case, the soleus is predominantly a slow twitch muscle as it is more involved in overall stability (what rehab types often call a tonic muscle) of the ankle complex.  The difference in fiber type between the gastroc and soleus has implications for training that I’ll get to at the end.

I really should note another issue with the calves and that has to do with the very tiny lever arm of the achilles tendon relative to the ankle (the axis of rotation).  Because of the specific anatomy of the calves, a rather small muscle can actually generate a massive force (technically: torque) around the ankle.  This is one reason that many people can use such absolute massive amounts of weight on calf work (in addition to something I’m going to talk about below).

What Makes the Calves So Stubborn?

As I said above, it’s generally accepted that the calves are one of the most stubborn muscle groups.  The question is what biological factors would make it so generally resistant to muscle growth.  I can honestly only think of one particularly good reason that makes it hard to turn little calves into big cows

I’m assuming that everybody reading this knows or has heard of androgen receptors (AR).  The AR is what testosterone and related molecules bind to and one of the effects is to stimulate protein synthesis.  In men, there is a distinctive pattern of AR whereby there is a higher AR density in the upper body (especially the traps and shoulder girdle which is why steroid users tend to have their shoulders BLOW up when they take anabolics) decreasing as you move down the body.   If you think about it, this makes sense, since the typical wide shouldered v-shape is sort of the ideal “male” physique, and we evolved like this for a reason.

By the time you get to the calves, the AR density is very low.  So even if you train the absolute hell out of them they simply don’t get the same training effect because testosterone can’t exert as much of an effect.  Even the legs of most men don’t have the same androgen receptor density as the upper body.  Yes, I’ve just given you guys an excuse for chicken leg syndrome.

On this note, Bryan Haycock once hypothesized to me that he thought that modern bodybuilders had better legs and calves than guys of old due to their essentially year round anabolic use.  By constantly bombarding even the low AR number of the legs and calves with constant dosing (not to mention that studies show that steroids actually upregulate the AR number), he felt that this contributes to better leg size.

Compare for example, the size of Lee Haney’s legs to that of Arnold in his prime, despite all that squatting with logs, Arnold had proportionally smaller legs compared to his upper body. 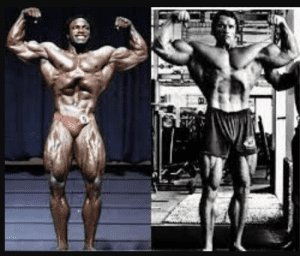 In any case, I think this is a big part of the reason that the calves are so hard to develop.  I’d note, and this is purely an empirical observation on my part, that some people seem to have somewhat reversed patterns whereby AR density seems to be higher in the lower body and lesser in the upper body.  These folks develop legs easily but the upper body never seems to catch up.  Women, especially those carrying more weight seem to have this happen but I’ve seen it in men too.  Again, I have no research on this, just an observation over the years.

But there is another issue regarding the calves that is worth examining, especially as it pertains to actually training the calves.

What Can We Learn from Kangaroos?

There’s another aspect of calf function that most ignore but that I think contributes massively to most people’s complete inability to develop their calves.  Everyone reading this at some point been in the weight room and seen the absolute skinniest of folks bouncing enormous amounts of weight on calf exercises without appearing to be working very hard.  They couldn’t do this on any other exercise, did you ever wonder what was going on?

To understand what I’m going to explain, I need to talk about elastic tissue and how it stores and recoils energy.  Tissues like tendons are termed elastic tissue (meaning that they can stretch/deform and come back to normal afterwards), if you load them quickly (e.g. through a fast eccentric), they actually store energy which you can then get returned to you if you move quickly enough.    This is part of why it’s always easier to bench out of a bounce than with a pause (there are other reasons that aren’t relevant here).

Elastic tissues can store energy and return it if you move quickly enough.

And that brings us to kangaroos.  Ever seen a kangaroo hop, ever notice how bouncy they are?  As it turns out, when kangaroos hop for distance, they do it in a very certain frequency.  And research has shown that this frequency allows them to load the tendon on the back of their leg to get a massive amount of elastic recoil.  In fact, elastic recoil provides about 92% of the total force production meaning that the muscles only need produce 8%.  ‘Roos can go forever because their muscles don’t fatigue and tendons don’t really fatigue in that sense. 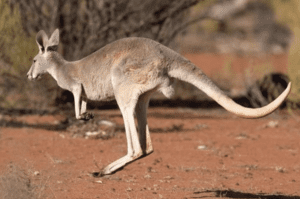 Do you see where I’m going with this yet?  The human achilles tendon, the elastic tissue connective the calves to the bottom of the foot works similarly.  Ours aren’t nearly as well developed in this regard as the kangaroo.  But the adaptation is similar and exists to making walking and running more efficient.

Running shoes have tried to build mechanical versions of this, spring type cushions in the heel of shoes that return energy when you run so that less muscular energy is required.

What do you think is happening when people do bouncy bouncy calf work?  That’s right, they are basically using the elastic energy return potential of their calves to move enormous amounts of weight without performing much muscular work.  And since the combination of tension and work is what stimulates growth…biology isn’t the only reason most people’s calves don’t grow.  Most people just train them terribly.

I honestly think this is where the idea of doing massively high reps on calves came from: when you bounce, you use such a tiny amount of muscular effort with each rep, that you have to do hundreds of reps to get the muscle to feel anything at all.

Of course, there’s a much easier solution and that is to make calf training more effective in the first place.

I didn’t mention the androgen receptor density thing because, short of taking steroids year round, there’s nothing you can do to control that.  But with proper training, we can take all of the above into account.

Exercise 1
A straight legged calf exercise: 5 sets of 5 done in the following fashion.

From a dead 2 second pause, explode up, squeeze for 1 second at the top, 3 second eccentric (for tempo freaks, this would be written X/1/3/2: explosive concentric, 1 second squeeze at the top, 3 second negative, 2 second pause at the bottom).  Take 3 minutes between sets and GO HEAVY.   When you get all 5 sets of 5, add weight at the next workout.  The gastroc is fast twitch, it responds to heavy loads.

The explosive concentric out of the pause will maximize tension, the squeeze makes sure that you’re controlling the weight, the slow eccentric is critical for growth.  Note: be careful on the pause, don’t overstretch the calves or you can give yourself plantar fascitis.  But don’t cut range of motion either.  You want some stretch on the calves, don’t try to drop your heels as far as possible.

From a 2 second pause, take 2 seconds to squeeze the weight up, brief pause at the top, 2 second eccentric (so 2/1/2/2).  60-90 seconds rest and use as much weight as you can in good form, you may have to drop weight after each set due to fatigue.  Being slow-twitch, the soleus will respond to longer sets and more of a fatigue stimulus. This should hurt like hell.

Putting it a little more clearly:

That workout should be done twice per week (or once every 5th day for people with poorer recovery) either as a specialization cycle or after legs.  Obviously you need to be eating to gain and your weight should be going up at a rate approppriate for your training level.  You’re not going to build muscle out of thin air and wishful thinking and if you’re not gaining weight while doing the above, you won’t grow anything.

I’d recommend that the above be done for an 8 week cycle.  During the first 2 weeks, start submaximally and please trust me on this.  If you’ve never done paused calf work like this before you won’t be able to walk for days after the first workout.  It’ll be the first time your calves have done any real work. After those 2 weeks, try to push the weights up especially on the heavy sets of 5 so that you apply progressive muscular tension overload.  After 8 weeks, drop the weight back and do it again.

I can’t guarantee that the above will turn your piddle calves into giant cows but compared to how 99% of people ar training the calves, doing it my way with a calorie surplus will work endlessly better.

34 thoughts on “Training the Calves”