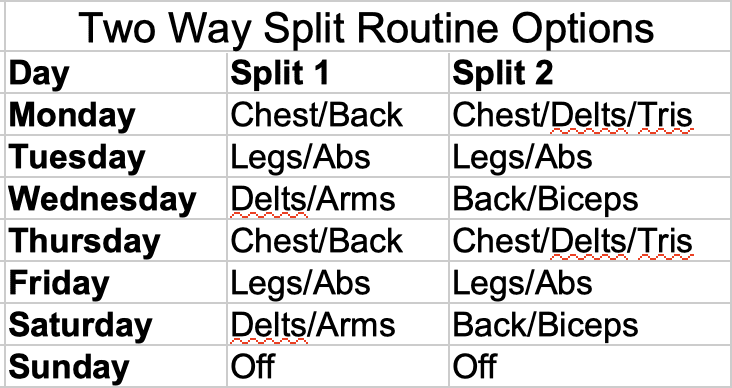 The reality of the world is that people are busy.  And while it’s easy to assume that people have endless time to devote to the gym, that’s not universally the case.    Not everyone can devote 1-1.5 hours to a workout if they have a full work and family schedule.   What’s the solution?  One is to perform shorter workouts during the week and longer workouts on the weekend when most have more time.  Another is to set up a workout that has the person lifting six days per week with much shorter daily workouts.  So let’s look at how to set that up to make optimal progress without overuse injuries.

Let me note ahead of time that training with this high frequency can cause problems and there are a number of pitfalls that need to be avoided.  Of course general overtraining is one of them but, more specifically is the issue of connective tissue and general overuse injuries.

Something that is so often forgotten is that connective tissues are the slowest tissue to adapt in the body: if you’re hammering things too often during the week, often trauma accumulates and causes problems.  Even if your muscles are recovering, if your joints or tendons/ligaments aren’t, eventually you’re going to get injured.

In this context what I absolutely would not do with a high training frequency would be to train full body at each workout.  Certainly, some Olympic lifters do this although their definition of “full-body” is a bit different than what individuals seeking muscle mass gains would be doing.

As well, they take years to work up to that level of training and there is typically a lot of intensity cycling going on (with heavier and lighter days).  In the types of training systems where guys max every day, well….the training breaks most people and there’s a reason that they keep failing drug tests.

In the systems where guys are going to max all the time, well…there’s a reason that those countries can’t pass drug tests anymore.  As well, the nature of the Olympic lifts is different in terms of how they hit the body relative to more traditional bodybuilding movements.

Don’t get me wrong, there are probably ways to implement a high-frequency “Full body” approach but it requires intense attention to loading, intensities, etc.  In my experience, most people seeking to gain muscle mass want to go hard every day and they get themselves into trouble.

So for most, I do not advocate that type of training.  Which leaves us with…

If full body training is out of the question, that leaves us with some sort of split routine.  Now, as I’ve repeatedly said on the site, I’m not a big fan of traditional bodybuilding splits where a muscle is hit only once/week.  Yes, they work for some.  In my experience, they aren’t optimal for most people.  So I wouldn’t set it up that way.

But that doesn’t mean that there aren’t other options.

One potential option would be to use some type of three way split routine (where the body is split into three “parts”) and rotate through it across the 6 days/week. This provides a nice frequency of twice/week for each body part and keeps the workouts short unless the trainee wants to get nuts with the number of exercises or sets they do.

However,  this takes very careful scheduling due to overlap and the potential for the shoulder girdle to get worked too hard.  Let me explain with the table below (Sunday is assumed to be a day off) by looking at two different three-way splits.

Split 1 would be a pretty common way of approaching things since chest and back can be alternate supersetted to save time.  Basically this is just the old Charles Poliquin split crammed into 6 days/week.  But there is a problem which is this: fatigue from delts/arms on Wednesday is likely to really screw up chest/back on Thursday.

If you go hard at all on that Wednesday workout, you simply won’t be able to use much weight on the following day.   As well, shoulder girdle is getting hit pretty hard four days/week which can cause problems in the long-term.  So that split routine is out.

Split 2 is a basic push/legs/pull split and avoids the problems from Split 1 of workouts interfering with one another.  However, the shoulder girdle is still being worked 4 times per week on both the chest/delt/tri and back/bis day.  While this can work for some, there is the potential for overuse issues and/or shoulder problems.  Of the two choices, this would be my first choice but just watch out for problems with overuse in the shoulder girdle.

If you don’t go with one of the above, that basically leaves with what would be my generally preferred choice which is a stock-standard upper/lower split routine training the full upper body one one day and the full lower body (with abs) on the second day.  This moves direct training for the shoulder girdle from four times per week to three (compared to Split 2 above) and movements can still be alternate supersetted to save time.

As well, since compound chest and back movements work the shoulders and arms, this allows volume there to be reduced further to save time.  Additionally, due to overlap, warmup for movements later in the workout is usually minimal. If you’ve done heavy flat or incline bench you shouldn’t need much warmup for delts or triceps later on.    At most you might do one quick set, at least you can probably skip that.

Of course, volume for each workout will also be low, basically you’re distributing the total weekly volume across the workouts so volume at each workout would be far lower.   After warm-ups, a handful at most of work sets would be done.  You might do 3-4 total work sets for large muscle groups and 1-3 for smaller.  You could either do all of the work sets for a single exercise or distribute them further across two movements (which is what I did in the example workouts below).

There are other options such as Rest-Pause/MyoReps types of sets which will let you cut the workout time even further.  Here you start with one challenging set of 8-12 repetitions to or very near failure.  Then you rest 15 seconds and do 2-3 more reps, rest 15 seconds and do 2-3 more reps and you stop when it gets super grindy.  Depending on who you talk to this might “count” as up to 4 straight sets.  Two of those and you should be cooked.

A fairly “generic” upper and lower body workout are shown in the table below.  You can make appropriate exercise substitutions as desired or needed.  While I’m not generally a massive fan of exercise variation within a given training cycle (change them every 6-8 weeks, not every few workouts), different workouts of the week could be used to do different movements with this type of frequency.

Let me make it very very clear that these exercises are only examples.  Trainees should always pick movements that fit their body, that they can do safely, which hit the target muscle, and which can be loaded progressively.  No exercise must be done in training outside of thoes parameters unless you’re a powerlifter or Olympic lifter.

Warmup sets are not included in the chart.

Again, the above are only SAMPLE exercise choices.  Pick the ones that fit you and keep in mind that you can vary these throughout the week.  Put incline bench first on the second upper body workout, do an undergrip row, change arm exercises.  Whatever.

If your gym will allow it, exercises could be alternate supersetted (e.g. do one set flat bench, rest 1 minute, do one set cable row, rest 1 minute) which save a little bit more time.  Folks who train in the evenings probably won’t have this option.  But with warm-up sets, the workout should take maybe 40-45 minutes door to door.

If more time is available on Friday and Saturday, a few more sets could be done since there is extra recovery to be had.   Don’t go nuts here, just add a couple of work sets to each muscle group.

Finally, I’d note that intensity will need to be controlled with this type of scheme.  One potential “negative” of higher frequency training is that often intensity has to be reduced somewhat to compensate for the increased frequency.  If you want to train very intensely, you can’t train often and vice versa.

In general, during the Mon-Thursday workouts, I’d suggest stopping work sets 1-2 reps short of failure.  As with the volume comment above, on the Friday/Saturday workouts, you could push a bit harder (either raising weights or pushing closer to failure) due to the extra day of recovery on Sunday.  So if you want to blow yourself out, those are the days to do it.

As well, you would still want to cycle intensity over the length of the cycle.  So the first 2 weeks would be relatively low intensity and then spend 4-6 weeks pushing a bit harder trying to hit some poundage PR’s at some point in the cycle.

You might simply attempt to add some weight to the bar every Monday/Tuesday workout (or every Friday/Saturday) and then maintain it for the next couple of workouts before bumping it again.  Just aim to keep the work sets during the week 1-2 reps short of failure and raise the weight as needed to do that.

Every 4-6 weeks, depending on how the individual was recovering, I’d probably drop the Friday/Saturday workouts completely to give a sort of ‘unloading’ phase with 4 full days off.  This will help avoid problems both with overuse type injuries as well as cumulative fatigue.

And that’s how I’d recommend someone implement lifting six days per week.