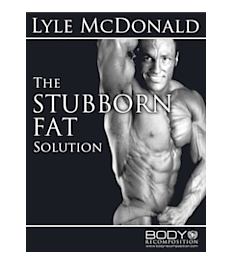 Note: This is an excerpt from Chapter 7 from my book The Stubborn Fat Solution.

So you’re now nearly 50 pages into this book and still wondering why stubborn fat is stubborn. Perhaps you’ve picked up some of the reasons by inference but finally, in this chapter I can put everything together.

In the past 6 chapters, you’ve learned a ton about fat cells and fat cell metabolism. One of the points I’ve tried to get across is that fat cells are not the same, different depots have different functional characteristics in terms of how easily they store fat, how easily they give up that fat, etc.

In general there are clear gender differences that show up at puberty, suggesting that sex hormones play a role in how fat cells develop. And there is much truth to this. It turns out that if you take a fat cell from a man’s thigh and a woman’s thigh, they are functionally identical and essentially indistinguishable physiologically. Even though the man generally has extremely low levels of estrogen.

The difference, practically, is that men don’t generally store fat in their legs and women do (i.e. the fat cells in a man’s legs are emptier than in the woman’s). As I mentioned before, men who store fat in their lower body have the same problems as women to get rid of it. But most men don’t.

The same holds true for visceral or abdominal fat from a woman versus a man. The female’s visceral/ab fat is physiologically identical to the man’s, although she has very low levels of testosterone. Hence, on average, she won’t store much triglyceride in those fat cells.

What this suggests is that fat cells in different areas of the body (which, again, are found in both men and women; the difference is in whether men and women actually store calories there as adults) have certain physiological characteristics that occur irrespective of the hormonal setting. So while the hormonal setting may affect where ingested calories get sent, they aren’t really controlling the underlying physiology of the fat cells.

Which is fundamentally why blocking estrogen doesn’t fix the lower body fat problem. Lower body fat cells act a certain way whether estrogen is present or not, that’s how they are genetically wired to act. The same goes for abdominal fat. Regardless of the person’s testosterone levels, they are wired to be a certain way. Now it’s time to learn what that wiring is and what makes stubborn fat cells stubborn.

So why does this matter? Different areas of body fat have different distributions of alpha-2 and beta-2 adrenoreceptors and this profoundly affects how well or poorly fat can be mobilized and transported out of them.

This is clearly part of why stubborn fat is so stubborn, the normal lipolytic stimuli that should mobilize fatty acids don’t work effectively. Quite in fact, due to the high alpha-2 receptor density, certain types of exercise can be distinctly anti-lipolytic. You’ll learn more about that in the next chapter.

Now couple that with information I presented earlier about how men and women store calories after eating. Women’s bodies may preferentially shuttle calories into lower body fat after a meal, on top of possibly redistributing fat from upper to lower body fat. Yet, they can’t be mobilized out as rapidly.

Years ago I remember some women claiming that while their upper bodies leaned out, they swore their legs were getting fatter. I dismissed it as nonsense at the time but the above physiological facts lend support to that idea. A woman might be mobilizing fat from her upper body fine, yet storing some of that fat (or incoming calories from meals) in lower body fat later in the day. Upper body gets leaner, lower body gets fatter.

In addition to differences in responsiveness to lipolytic stimuli, certain fat depots have significantly poorer blood flow than others. You can test this yourself, touch an area of your body where you lose fat more easily, it should feel fairly warm. Now touch your butt, hips or thighs. Probably stone cold.

Studies have shown that blood flow in lower body fat can have 67% lower blood flow than other depots. Visceral fat has extremely good blood flow, it also goes away very quickly. If you could drive your hand into someone’s stomach and feel their visceral fat, it would probably feel fairly warm.

Poor blood flow has two consequences of importance here. First and foremost, it means that blood borne hormones (such as the catecholamines which, recall, don’t work well in the first place) can’t get to the fat cells. Second, poor blood flow makes it harder to get mobilized fat away from the fat cell so that it can be burned elsewhere.

Why the blood flow is so poor isn’t well established. Part of it may simply be less blood vessels, imaging studies show very few in that area. As well, it appears that the blood vessels in the lower body have more alpha- than beta-receptors; this has the same consequence as for lipolysis. More alpha-receptors means more vasoconstriction and less vasodilation which adds up to less blood flow.

You can read more about stubborn fat, along with training protocols to eliminate it in The Stubborn Fat Solution.

6 thoughts on “Why is Stubborn Fat Stubborn?”