The upright row is an exercise that has gone in and out of fashion.  Used for decades, they became unpopular in the 90’s and beyond due to safety concerns.  But much of that issue had to do with how the upright row was done.  So today let me answer a question that I see/get a lot which is: are upright rows safe?

My hair isn’t actually as crazy as it looks.  The thing on the top of my head is part of my rack.

In recent years, what have been come to be called the “exercise police” can be found online.  While some are just folks making technical nitpicks, many are the ones proclaiming that a given exercise “is” or “is not” dangerous.  The problem here is that it’s simplistic to look at any given exercise in this fashion.

Rather, it’s better to look at exercises in terms of their pros and cons or perhaps in a risk:reward sort of way.  That is, are the potential risks of an exercise worth the potential rewards.  As well, you can only ever look at at any given exercise within a given context.   At best any exercise might be considered safe or unsafe for a given trainee in a given situation.    There are few absolutes.

That said, the upright row specifically is often surrounded by its share of “This is an unsafe exercise” beliefs.  Let’s look at why.

I think the first place I saw it asserted that upright rows were categorically unsafe was in the old 7-Minute Rotator Cuff Solution from Health for Life (HFL). 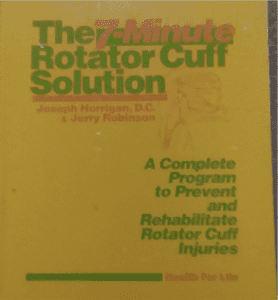 HFL is a now defunct company that put out a variety of different manuals many of which were quite good and/or ahead of their time.  Of course, I have most of them on my bookshelf.

They based their argument on the fact that the upright row put the shoulder in an internally rotate and horizontally ABducted position.  Which I won’t try to really explain but has the effect of putting the shoulder at risk for impingement.  Hence to avoid shoulder problems, upright rows became one of the big no-no exercises for people.  But it’s not as if the idea doesn’t still persist.

As an amusing note: many of the people I saw raging against upright rows BECAUSE THEY WERE DANGEROUS were always in the camp of teaching everyone deadlifts and power cleans.  You know, movements with zero known safety risk.  My point that, given the choice I’d rather have shoulder issues than low back problems went nowhere.  But I digress.

But is the above strictly true.  Well, certainly as they are commonly done or recommended in the bodybuilding subculture, I would consider the upright row an unsafe exercise.  Typically bodybuilders will use a straight bar, narrow grip and pull the bar as high as possible.  Often this means pulling to below the chin with the elbows nearly at ear level. 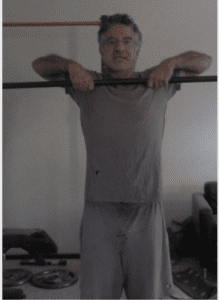 As you can see, the elbows are being brought very high (often the goal is to get them to the ears) and certainly that tends to put the rotator cuff in a high risk position even with excellent shoulder control.  As well, you don’t really get a whole lot more involvement of the deltoids in the first place by pulling the bar this high.  So you increase the risk without really impacting on the movement’s benefit as a shoulder movement.

So for those reasons, I certainly wouldn’t recommend folks do upright rows using that technique.  The risk is high and the benefit relatively low.  This is especially true given that it’s easy to modify the movement into one that is not only safer for the shoulder but targets the deltoids just as effectively.

The key to making the upright row safer is to limit the range of motion, only lifting until the elbows are even with the shoulders.  Typically this will put the hands/weight at about sternum level.  Here’s the barbell version of this. 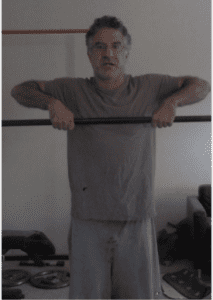 By limiting the range of motion in this fashion, there is far less of a risk for impingement of the shoulder.  But it still provides plenty of muscular tension for the side delt.    I’d mention that it does still require some ability to control the scapula (in terms of setting the shoulder down and not letting it elevate) so someone with a previous rotator cuff injury might still have problems with it.  But for someone with good scapular control and no other shoulder issues, I see no problem with doing upright rows in this fashion.

One issue with the barbell version of the upright row, no matter how it’s done is that the wrists get kinked pretty hard at the top.  This can be avoided or at least limited by doing the movement with dummbells.  This gives the wrists far more movement and the stress tends to be a lot less. 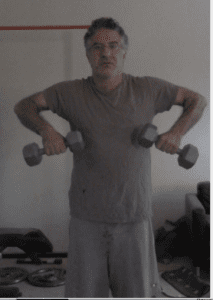 My elbows should actually be a little bit higher in that picture.  But it gets the point across. DB’s also allows the movement to be a bit more up and out and you can see that my wrists are in a far more neutral position.

A final variation of the modified upright row is to use a rope handle off of a low cable.  Sadly, I gave my bands to someone to use during the Coronavirus pandemic so I’m demonstrating with a dual dog leash.  I think you get the idea. 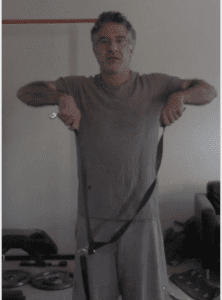 So are Upright Rows Unsafe?

Well, I’d say that it all depends on how you do them.  Done in the traditional way, they certainly have a fairly high risk to reward ratio.   In the modified version, limiting the movement to pulling no higher than elbows level with the shoulders, any risk is vastly reduced.  Mind you, the movement does still require some scapular control and for people with previous shoulder injuries, the movement may still be a no-go.

But for people with health shoulders who do the movement as I’ve shown, I don’t see the upright row being inherently any more unsafe than a lot of other movements people regularly advocate and perform.

11 thoughts on “Are Upright Rows Unsafe?”