Fish has long been considered part of an athlete and “healthy” diet and there are many good reasons for this to be the case.  It’s a high quality protein and, depending no location and type, is generally inexpensive.  Low-fat fish is nearly fat free and higher-fat fish contains healthy w-3 fish oils.  At the same time not all is good in the land of fish due to the mercury content.

Mercury, as I imagine most know, is a toxic metal compound that, when it accumulates in the body, can cause a lot of problems.   Quite in fact, readers may have heard of the Mad Hatter syndrome which was actually caused by mercury being used by hatters back in the day.  The exposure caused them to go nuts.  It also gave us a great Batman villian.

But that raises the question of how much fish can be safely consumed.    To address this, I’m simply going to excerpt the section on fish from Chapter 10: Whole Food Protein of The Protein Book where I examine fish protein and the issue of mercury content.

As you’ll see, depending on the type of fish in question, mercury can range from non-detectable to very low to exceedingly high.  And given the recommendations (at the end of the article) for daily limits to mercury content, it becomes clear that while some fish can be consumed in significant amounts daily, others are limited (e.g. 4-5 oz of canned tuna per day is about the limit even if bodybuilders and athletes often eat far more than that) and others exceed daily intake recommendations by far.

Fish is a high quality protein and many types of fish are extremely low fat, making it an excellent protein source choice. There are numerous varieties of fish and, similar to fowl, fish is appropriate at all times of the day except immediately around training. Of interest to dieting athletes, some research has found that fish keeps people fuller compared to either chicken or red meat (1).

Although fish is often chosen for its low-fat content, even the higher fat (typically cold water) fish typically contain most of their fat in the form of the omega-3 fish (w-3) oils.  These fats have a tremendous number of benefits, both for general health and athletic performance.

More benefits are being found constantly and it’s not an exaggeration to say that, if individuals were to take any single supplement on a daily basis, it should be a fish oil supplement.  Although food scientists are working to increase the w-3 content of other foods (such as w-3 eggs described below), fatty fish remain the primary source in the food supply.

However, counteracting the potential benefits of fish and the w-3 fatty acids, there is increasing concern over the mercury content of many types of fish; because of their place in the food chain, mercury accumulates in the tissue of the fish to varying degrees.

Chronic mercury exposure could potentially offset the benefits that fish might provide (1). Because of the potential health effects of mercury, both the United States Environmental Protection Agency (EPA) and the World Health Organization (WHO) have set daily and weekly limits for safe mercury intake.  Pregnant women, or women intending to become pregnant should minimize mercury intake from fish to avoid the possibility of birth defects.

A list of fish with their mercury concentration (in parts per million for a 3 oz serving) appears below. 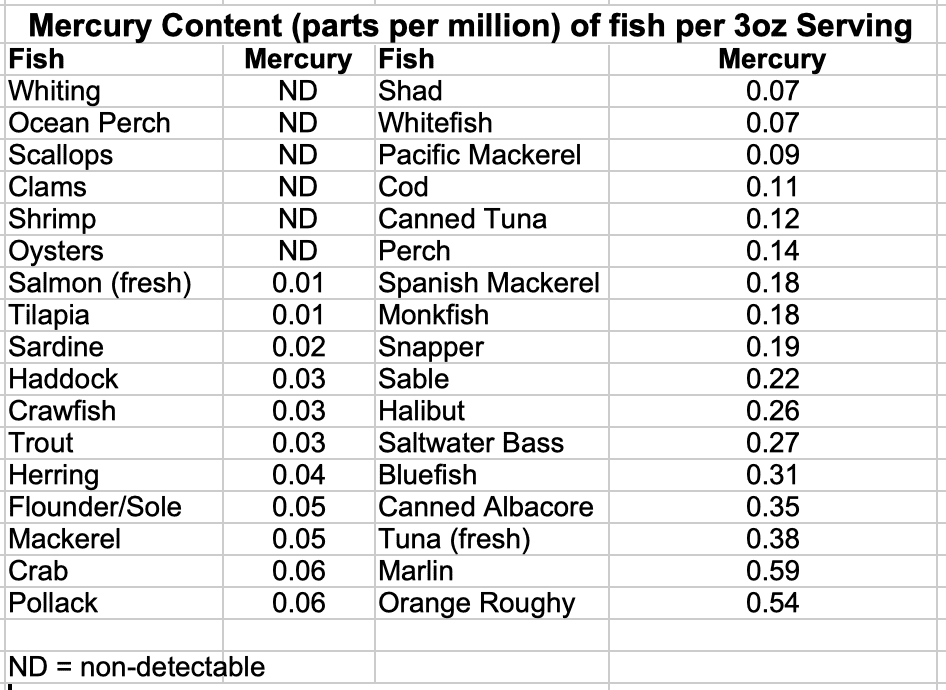 Lower numbers are better, indicating less mercury per 3 oz serving of fish.  On a daily basis, males should stay at the 0.19 level or less.  Fish with a mercury content higher than this can be eaten up to twice per week.

Females should stay at a level of 0.14 or less for daily consumption and can go up to 0.38 twice per week.

Orange roughy, a staple of some dieting bodybuilders, is far in excess of acceptable mercury levels for regular consumption.