After last week got away from me talking about the neural factors in strength performance, I hope to keep it a little bit more brief today.  And what I want to talk about is how I specifically worked to rehab an injury in one of my few trainees.

The long and the short of it is that during a workout, they got all twisted up during a ball game and their limp on the left side indicated that something was injured.   A quick trip to the doctor along with some X-rays determined that, thankfully, it wasn’t an ACL tear.  Rather, the hip joint was injured and no surgery was indicated.

It didn’t appear to be too severe but I was told to bring them back if it wasn’t improving after a number of weeks.  Painkillers were provided to be used as necessary and the trainee used them fairly continuously for the first two weeks simply to facilitate overall daily activity without pain.

The next few weeks were fairly simple, the trainee was kept off the injured leg to as great a degree as possible.  Food was also kept high enough to ensure an optimal situation for tissue healing.  There was some fat gain which is never easily accepted by anyone but it was the price that had to be paid in the short-term.

You need an anabolic state to heal injuries and that means sufficient or a slight excess of calories.  I always shudder when I hear people ask about dieting when injured to avoid fat gain.  Because all it will do is slow healing.  The fat can come off later.

Perhaps the biggest issue was one of simple boredom.  Being on what amounts to chronic bed rest, especially when you’re used to being highly active, can drive the strongest mind crazy.  And with no insult intended, this particular trainee isn’t the sharpest mind to begin with.  I tried to find activities to keep them mentally busy but it was definitely a short-term band-aid situation.  There wasn’t much else that could be done.

After a few weeks, it became clear that the injury was getting better.  This was subjective on my part, observing the trainee’s movements, primarily walking.  Were they protecting the injured side, trying to limit pressure on that leg?  As I saw the trainee get to the point where there was no apparent asymmetry during walking, I decided it was time to gradually bring them back into activity.

Now, this trainee normally works out with a partner, who I had continued to train throughout this entire time (he got worked harder since he wasn’t alternating with my injured trainee).  It wasn’t ideal but that’s how it goes.    As the initial trainee started to heal, I’d put their partner through the majority of the workout before allowing the ex-injured trainee to perform only a small amount.

This, again, was subjective on my part and I simply started slowly.  So while the normal volume of training was perhaps 15-20 repeats, I only had the injured trainee perform 2-3 repeats to start. They might go once for every 5-6 repeats the healthy trainee did.  I watched closely for any signs of pain or discomfort after every rep and especially in the time frame afterwards.

Over the next several weeks, I’d gradually increase the repetitions, perhaps adding 1-2 repeats every few workouts so long as I saw no discomfort.  This helped immensely for the trainee’s overall state of mind (such as it was) and it was at this point that food intake was brought back to normal to generate a gradual decrease in bodyfat. So far as I was concerned the trainee was healed and as activity went up, a slight calorie deficit would bring them back to their normal healthy body fat level.

Two weeks after re-starting activity, I’m happy to say that the injury seems healed.  I’m still conservative during workouts and watch for any problems but any and all activities seem to be relatively normal at this point with no issues.

And while I’ll still be careful going forwards, since injured areas are often likely to injure again, I foresee no major issues for this trainee.  So overall my approach, ensuring sufficient calories and nutrients during the immediate recovery period before starting a very gradual increase in activity over a number of weeks until they had reattained normal training volumes seems to have worked.

The Trainee and his Workout Partner

And for those of you who are wondering about my particularly odd writing style and phrasing in this piece (or who haven’t figured it out already), this is the trainee I’m talking about along with his training partner: Alfie on the left was the injured one, Norman was not. 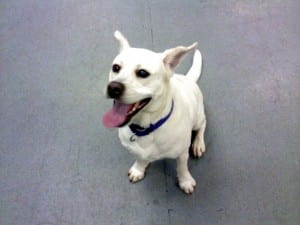 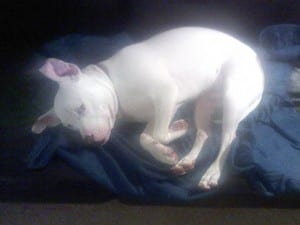 The little idiot chases tennis balls like a bit of a spaz and got himself twisted up and strained his left hip doing so.    So I had to keep him on bed rest with nothing but pottying, extra food and nothing else for the roughly 4 weeks until he was walking normally, able to jump onto the bed and wasn’t whining or protecting the foot.  I’d give him a puzzle kong while I ran Norman so he wouldn’t get too nuts and started him back chasing the ball a few times after about 4 weeks when I saw him walking normally.

One last note, all of the time frames I provided would be longer for a human. Dogs life spans are shorter and everything moves faster for them so don’t take the 4 week and 3 weeks I gave for getting Alfie back to normal as anything but illustrative.  Principles, folks, not details.  Eat sufficient amounts while the injury heals, gradually increase training back to the old levels so long as no pain or discomfort occurs during or after the workout.

Patience is the key.  Yeah, yeah, patience how long is that going to take?

Although it kind of fits in with the impact of muscular factors on strength performance, I want to discuss the...