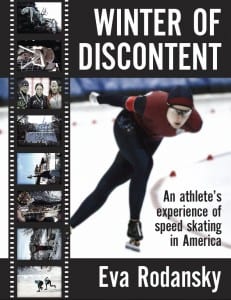 As readers may or may not know, I have been in Salt Lake City, Utah for the past five years involved in long-track ice speedskating.  While that chapter of my life is coming to an end shortly (and I’m returning to outdoor inline racing as described in a previous article), with the Olympics currently in full swing and speedskating being of great interest, I wanted to review a new book that I suspect most would never be made aware of.

The author of this book is a skater by the name of Eva Rodansky who I have been lucky enough to become friends and teammates with. During my 5 years here, she was always sort of on the periphery, I knew her, we would joke around but we never really interacted beyond that.  During one awful summer, her coach and my coach tried to work as a team; it was a disaster because her coach simply overtrained and injured everybody (except me, since I wouldn’t do his idiot training).

She was told repeatedly by some of the best coaches in the world how great she could be and, much to my dismay, I watched her talent summarily wasted by incompetents who were more interested in their own glory than her success.  My coach and I spent years wishing he could work with her and train her properly so that she could achieve her vastly under-tapped potential.  Didn’t happen.

Last summer, on a whim, she came out to one of our inline workouts.  Something clicked for me that day skating with her and she and I pulled a set that I’d have thought impossible as much as a week before.  At lunch, my coach and I essentially browbeat her into considering a comeback and another run at the games.

She decided to come back to the ice and train and, to put her talent in perspective, after 2 years away from the sport, and perhaps 4 weeks back on the ice, she skated one tenth over the Olympic qualifying time in the 1500m going about 80% effort.  For various reasons, she decided that taking another run at the Olympics was not worth it to her emotionally or physically.  However, she continued to train and she and I became good friends (I also learned a ton from her in terms of skating).  Ultimately she capped off her career by setting three Master’s International records that I suspect will stand for quite some time.  Would have set a fourth if not for having been sick the week before.

Which is all a very long way of introducing Eva’s book, Winter of Discontent: An Athlete’s Experience of Speed Skating in America, which I’m actually going to review now.  The book represents several years of writing (and sometimes ranting, if truth be told) about her career and her experiences in speedskating.  While she was skating, she had blogged (sometimes quite angrily) about her experiences with skating.  That, along with many earlier experiences, had branded her as a troublemaker in the sport.

But, with all of those blog posts underneath her, and much more to say, she had wanted to write a book about her experiences in the sport.  She said that it was to get the truth out about US Speedskating.  While I think that was part of it, I think just as big a part was getting the anger out of her system; a catharsis if you will. Putting it all to paper let her get it out of her system while skating for fun with our group let her remember why she started in the first place.  She truly loves the sport of speed skating; it’s the federation and politics that are the problem.

I’ll tell you upfront that I am a bit biased towards this book as I helped her to edit it and bring it to fruition; and she is a friend.  Make no mistake, the writing is all hers.  I worked simply to clean up some bits and help her with the myriad details that make finishing a book of this scope monumentally nightmarish.  Even if that wasn’t the case, I’d still be saying the same things about it that I’m about to say.  My involvement has no bearing on what follows regarding her book.

The first is her personal story, how she got interested in skating at young age, made Category 1 (essentially national level) after 4 months of training, her two barely missed Olympic teams, her world cup successes and failures.  There’s much more of course, her retirement to get a masters in biology, her return to sport and training full-time towards the Olympics all while holding down a job in a lab.   Note that there isn’t the happy ending to Winter of Discontent that tends to be part and parcel of such books.  No gold medals, no world records, no parades.

Certainly she had her successes and with proper coaching could have been truly great but mostly she was simply dumped on by the federation and other, protected skaters, constantly all while being mishandled by incompetent coaching.  One person, a higher up in the federation, once said of her “No one cares about Eva Rodansky” but I disagree.  She has friends, skaters and non-skaters alike, that watched her immense potential ruined by a federation more interested in politics and personal grudges than in sending the best skaters the country has to offer to compete at the world level.  Those people care about her.  So do I.

And that brings us to the second story in this book: the story of the US Speedskating governing body.  And it is not a particularly nice story.  With the Olympics at full tilt, most of the stories people hear are about the good, the athletes, supported by their federation who overcome great odds to take home the gold for their country.  Sadly, much of that is smoke and mirrors.  People don’t like to hear about it but the amount of corruption that goes on in sporting federations is immense.  From politicians on the take to bribery to countries buying their way out of failed drug tests, the games are big money and that means corrupt people in a position of power who use the athletes to their whim. And the athletes often have no choice but to go along with it; it’s that or be kept from pursuing their one solitary goal.

In terms of US Speedskating specifically, the problems range from  unqualified individuals running the facilities to coaches  and bureaucrats who misappropriate money.  Having rescued US Speedskating from ruin, perhaps Stephen Colbert will follow by looking into where that money ultimately went; because it sure wasn’t to the athletes.  One of whom had to pay his own way to the World Cup with the understanding that he would be reimbursed if he placed high enough. Had he not had the money, he couldn’t have gone to the event.  How that facilitates his long-term development is beyond me.

More specifically to Eva, a good example of the type of thing that goes on was used as part of a grand overtraining experiment (in an Olympic year no less); half the team was deliberately allowed to fall of the edge to gather data.  Data that already existed and was never used.  The coaches did this knowingly, without the consent of the athletes, all while telling the athlete it was their fault for not being able to handle the training.

And that’s the second story in this book as Eva ran into all of it throughout her career.   She was tagged as a troublemaker from the get go and this caused the federation to work against her in almost every way, from denying her ice time, denying her therapy and all other manners of behaviors that kept her from having a chance at meeting her potential.  Simply because they didn’t like her.

Never mind that she could have performed at the highest levels.  Nevermind that at Torino, one particularly petulant skater decided that she wouldn’t skate the 1500m, leaving the US team with no women to compete.  Had Eva not been left off as alternate, she’d have at least been able to step to the starting line to represent her country. But because of a personal grudge, and Eva not being with the team, the US simply had no-one skate. Basically, the federation was more interested in politics than in seeing the US succeed in the sport.

Through Winter of Discontent, Eva tells both her story and the story of US Speedskating.  And it’s not always a nice story.  But I think it’s an important one for people to hear which is why I want to make people aware of it.  Whether you have an interest in sport in general or speedskating in specific, this book may make you aware of some of the things that really go on in high-level sport that you won’t hear about otherwise.

I’ll be blunt: if you’re the kind of person who needs their sports books to be full of happy endings and Rocky-esque moments, this is not the book for you to read.  If you want a true insider’s view of high- level sport in what is admittedly a niche sport (and make no mistake, I’m sure athletes in all sports could tell similar stories), this is a book you will want to read.  It pulls aside the veil of smoke and mirrors to let you see the real story of what goes on.   This is the story you won’t see on NBC between shots of Apollo Anton Ohno winning gold, it’s not the story you’ll see in the major news media.  Because it’s not a story people want to believe is true.  But it is.

At 400 pages length across 30 chapters of varying length and only $29.95, Winter of Discontent is a steal of a book; it can be purchased from Eva’s website at USSpeedskatingdirt.com. The book is written in a very easy to read conversational tone; Eva is a good writer which is part of why I encouraged her to finish the book even if it meant a lot of stress and late nights to get it done while the Olympic games were going on (almost nobody cares about speed skating the rest of the time).

And since I think it’s so important of a book (and I’d note again that I helped edit the book and Eva is a friend), I’m going to sweeten the deal. If you order Winter of Discontent within the next 2 weeks (between now and March 8th), simply forwards you sales receipt to wod@bodyrecomposition and I’ll send you a single use coupon (good for one year) for $10 off of any purchase you make through my store.

You can use it to purchase any of my current books (and the coupon will work with any other offers) or save it for upcoming projects (of which one should be ready to go in a few weeks).  Even if you don’t want the coupon or care about my books, if you’re interested in sports in general or speed skating in specific, I highly recommend this book.  It’s a story I think you should read.

So that’s Winter of Discontent: An Athlete’s Experience of Speed Skating in America.  It’s not a happy book at times but it is an important book in my opinion.  So go get it and read it (or let people you know who might be interested in it know about it).  You may not like what it has to say but sometimes that’s not a bad thing.  The truth may not always be happy, but sometimes that’s the best way to have your eyes opened.