Today, I want to look at the issue of setting exercise intensity in the context of aerobic work, interval training and weight training.  It’s something I’ve been meaning to write about for a while (I think I actually started an article on it years ago) I have included it in other books (notably the Stubborn Fat Solution) and it is going in The Women’s Book.

Traditionally, the intensity of aerobic exercise has been set with heart rate. The typical first step was to estimate maximum heart rate and an old equation of 220 minus age is commonly used. This equation was developed decades ago on a small sample of men and a better equation for women would be 227 minus age in the first place. But the problem is that maximum heart rate can deviate enormously from this value.

That maximum heart rate was then multiplied by various percentages (such as 60-75%) to set training ranges for aerobic activity. And while these types of calculations may be relatively accurate on average, they can be extremely inaccurate for any given individual. Two trainees of the same age, who have different maximum heart rates can end up working at drastically different exercise intensities.

In recent years, performance athletes have started to set their training intensities according to some type of performance threshold. In years past this was called the anaerobic or lactate threshold but most just call it the functional threshold now. This represents the maximum level of effort that can be maintained for about an hour and athletes will typically determine their speed or power output for that time.

Not only does using an individual threshold help to eliminate the problems associated with using earlier methods (and allows endurance athletes to be far more accurate), it’s critical from an adherence standpoint for beginning exercisers. Because it’s been shown that exercise at or above threshold intensity tends to cause a lack of enjoyment and this decreases adherence to the exercise program. Highly motivated athletes will put themselves through this type of training since it’s necessary to reach their goals.

Problems with the Threshold Approach

But this brings up the problem of actually measuring where this threshold actually is. For athletes, there are various methods that can be used. So a runner might do an hour run at the highest intensity that they can maintain and track their speed and heart rate. Cyclists will frequently use power meters and swimmers have their own tests to determine where their personal thresholds and training intensities are.

There are also methods of determining threshold based on short duration tests but these tend to be used almost exclusively by endurance athletes. For other athletes, and especially the general trainee, this type of test is difficult, uncomfortable and generally problematic.

Except for highly trained athletes who have the ability to accurate determine their threshold, I will recommend a completely different method for setting aerobic (and HIIT) exercise intensities. And that is a method that is called Rating of Perceived Exertion (RPE), a scale that ranks exercise intensity from 0 to 10. A zero would be equivalent to no exercise at all and a 10 is an all out effort. Everything else is in-between those two extremes. 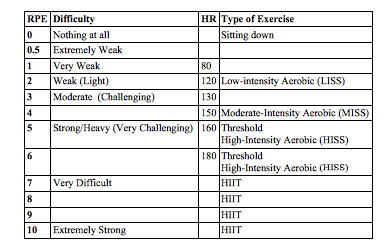 So an RPE of 2 would be a low-intensity aerobic workout such as slow walking or very slow cycling (it is very difficult to run at this heart rate). If heart rate were measured, it would generally fall between 120-130 beats per minute and the overall effort is very low. Between 3 and 4, the effort is challenging but comfortable and heart rate might increase to 130-150. It’s very difficult to get heart rate this high with walking and moderate speed cycling, jogging, rowing, etc. would tend to put people in this range.

At an RPE of 5-6, the threshold intensity is being reached and heart rate might fall, on average, between 160-180 heat rate. It takes a considerable amount of motivation and effort to maintain this intensity and many endurance athletes will actually train here in an interval like fashion rather than doing a continuous hour.

Workout ranging from 4 repeats of 10 minutes with a 5 minute rest up to 2 repeats of 20 minutes with a 10′ rest would be common here. Threshold work is also rarely done more than 2-3 times per week and only then if very little else is being done. It’s just too difficult to perform regularly.

Once the threshold intensity is exceeded, the exercise is technically no longer aerobic and cannot be maintained for extended periods and will performed as HIIT. I’ll discuss HIIT guidelines below. True sprint training is done at an RPE of 10.

With practice, RPE can be very accurate and as good if not better than using heart rate and automatically takes into account individual differences in fitness, motivation, etc. An RPE of 3 is an RPE of 3 whether the person is a beginner or a trained athlete. But RPE does take practice. The best approach for beginners is to simply ask themselves what RPE they are working at during an aerobic exercise session. Typically if they take a heart rate measurement it will end up being very close to what it needs to be.

Over time, the accuracy of RPE will improve as trainees get more of a feel for how difficult an exercise session is or isn’t. Fitness gains can be tracked with RPE as well; when the RPE at a given exercise intensity goes down, the body has become fitter and it’s time to increase the workload. Speed or incline on the treadmill, the resistance or level on indoor exercise machines, speed cycling outside can all be increased slightly to apply progression.

With one exception, as the name suggests, the intensity of high-intensity interval training (HIIT) is quite high and will generally be done in excess of the threshold intensity listed in the RPE scale above. How much higher than threshold HIIT is done depends on the specific goals. As the intensity of the interval goes up, the duration generally goes down (see below).

An exception to the above is a specific type of interval training called aerobic interval training. This is typically done with beginners who may not be able to complete a full 20′ exercise session at the appropriate intensity. In this situation, an interval of 3-5 minutes at a goal RPE of 4 might be alternated with 1-2′ at a lower RPE until the full workout can be done.

But outside of that exception I’ll focus only on true HIIT done above threshold. Since heart rate takes some time (3-5 minutes) to go up, it’s never been terribly useful for setting the intensity of HIIT and here RPE is a better choice. Performance athletes typically set their interval intensities relative to their threshold speeds or power outputs but this is still problematic for non-athletes.

Traditionally intensity in the weight room has been defined as some percentage of 1RM. If a female was capable of lifting 100 lbs once and wanted to set intensity at 75%, the weight used would be 75 pounds. This approach generally came out of sports that were based around the 1RM for competition purposes such as Olympic lifting and powerlifting and it was logical to base training of the 1RM. But there are a number of problems with this approach to setting intensity for weight training. The first is that training by percentages or relative to 1RM generally requires actually testing the 1RM.

The first is that testing a true 1RM takes skill and practice and only the pure strength/power athlete may be able to do this safely (in some strength/power sports, the competition goal is to lift the most weight possible for 1 repetition). For everyone else, testing 1RM is potentially risky.

An additional factor is that 1RM can vary from week to week and this can be more pronounced for women than for men. While it is enormously variable, the normally cycling female (less so women with the other hormonal modifiers) may see her strength change enormously from one phase to the next. The 1RM that was appropriate in, say, the early follicular phase, may be completely different in the late luteal phase. Due to other differences including neurological and psychological, women may be less skilled at expressing a true 1RM than men as well.

For various reasons (and some of these are gender based, discussed in detail in the The Women’s Book) reasons I do not suggest setting the intensity of weight training by percentage of RM outside of perhaps highly trained strength/power athletes. Rather, I will talk about setting the weights in terms of an RM load. A 10-15RM would represent a weight that can only be lifted 15 times for example regardless of the percentage of 1RM being used.

With this approach, a general approach to setting weights would be that a weight that can’t be lifted at least 10 times is too heavy and one that can be lifted more than 15 times is too light. However, since training with RM loads/to failure constantly can cause it’s own set of problems, I will actually recommend a slightly different method which a modified RPE scale that has been developed specifically for weight training (5).

Note: I believe that Mike Tuscherer was the first to use, or at least popularize the use of RPE for weight training in his excellent Reactive Training System but will focus here on the research that has been done on the topic.

Here RPE indicates how close to an RM load/failure a set is. Rather, it represents the number of repetitions in reserve (RIR), the number of additional repetitions that could be done with a given load. The modified RPE lifting scale appears below.

I haven’t included RPE below a 7 as they are mostly for warm-ups and don’t have much impact on overall progress in strength or muscle size. As with aerobic exercise and HIIT, using RPE in this fashion takes some practice. One way to get a better idea of it is to actually take an exercise to failure.  Because without knowing where failure actually is, it’s more or less impossible to know how far away from it people are.  A good strategy for this is to take the final set of a given exercise to momentary muscular failure to get a better idea of what a 10 truly is.

How Does the Menstrual Cycle Affect Energy Balance?

One of the primary factors that separate women and men is the presence of the menstrual cycle, the roughly 28...