Ok, my brain must be feeling better since it’s, oh my god, new content.  This is actually one of many pieces that have been floating around my brain but, let’s just say I had other things going on for a bit.

Anyhow, what I want to look at today is the arguments surrounding the whole round backed deadlift thing.  I think what brought this to the forefront right now was Greg Nuckol’s analysis of the dead lift from a mechanics point of view that I read the other day.

Now I have previously done technique articles about the clean-style deadlift as well as the RDL vs. SLDL and in both I certainly seem to be against any sort of back rounding in the deadlift.  Well, yes and no.  Even in the first linked article I specifically stated:

And just as I was talking about a very specific style of bench press in the previous technique article, I want to make it clear that this piece is only detailing the clean style deadlift.

I mention this in that, in recent years, other deadlift techniques have become somewhat more common. Rounded upper backs and more of a stiff-legged type of DL are being seen. This seems to be especially true in geared powerlifting and among super-heavyweight lifters. But those are very specific styles of deadlift for every specific purposes.

But today I want to get more into details.  Mainly I want to talk about how the two different extremist camps are doing something that I almost wrote an entirely pointless separate article about but can probably cover in like two paragraphs.

Arguing Across Each Other

This concept, which I’m sure has some technical name (I’d call it, generally, “Internet Idiocy”) is something I see a lot of.  It describes a case where two people or groups are vehemently arguing some point but fail to realize they are actually arguing about completely different topics.

So they go back and forth with their impassioned and/or fact/evidence based information and both are effectively right (or wrong depending on your point of view).  Because the are actually not talking about the same thing.  They are simply arguing across one another.

Boom, did it in five sentences and saved everyone a multi-page redundantly overwritten article.   Yay, me.

So how does this apply to the topic of round-backed deadlifting?

Arguing at the Extremes

At some point in the forseeable future (meaning between now and the eventual heat death of the universe), I intend to write a lot more about the topic of technique and the extremist camps (represented roughly by “There is only ONE way to do everything and I know what it is.” and “Bro, it’s all good, the body will figure it out.” camps).  But today is not that day.

When it comes to the deadlift technique, you basically have the camps of “Oh my god, you should never ever ever ever round your back during a  deadlift or your spine might shoot out of your ass.” and the camps of “Hay guyz, the top deadlifters round their back and you flat backed extremists are not only wrong but ‘Bro, do you even lift?  You can’t even move big weights so stfu, noob.'”  More or less.  Just do a search on “Round Backed Deadlift” and you’ll find articles to effectively that  second point.

Mind you, OL’ers typically move some mighty big weights with a flat back but certainly most of the biggest deadlifts in competition these days are done with a rounded back.   Mind you, the deadlifty part of the OL’s is really a means to an end, to put the bar and body in position for a proper second pull, hence it has to be done in a very specific way.  In contrast, the deadlift is an end in and of itself and how you get the bar from floor to lockout is only important inasmuch as you do it safely and efficiently.

And as per Greg’s linked piece above, there may be some damn good reasons, resting around lever arms and mechanics and physics nobody truly cares about, for powerlifters to do so. So clearly the round backed guys are right, right?  Biggest weights moved, physics is on your side, it’s science.

Well, not exactly.  Refer to the above section on arguing across one another.  I intend to show that both groups are essentially right (or wrong depending on you look at it) about round backed deadlifts, they are just talking about different things without seeming to realize it.  Arguing across one another blindly (since this is more fun than listening to what the other group is actually SAYING).

The Case Against Round Backed Deadlifts

Ok, I looked and looked for a video to show what I wanted to show and, for the life of me, couldn’t find one.  So pictures will have to suffice.  First look at the two pictures below.  The lifter starts with a flat back (clean-style) but once the bar starts to move, his back (both upper AND lower back) round.  If you go find this in Google images (where I stole it from), you’ll see that I actually reversed the original picture. 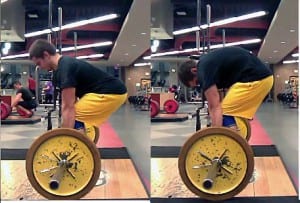 Note: apparently the above pictured comes from Izzy’s excellent Powerlifting to Win site.

You can see this in just about any (non-powerlifting) gym on a day-to-day basis and even the most hardheaded round-backed deadlift proponent knows it.  Hell, go to any Gold’s gym today and you can probably see this.  A lifter who is deadlifting, starting with a flat back and his first move (or at least somewhere in the movement), his entire back rounds completely, including both the upper AND lower back.

This has a number of consequences not the least of which is throwing strain from spinal erectors to the ligaments of the spine (due to a weird inhibitory reflex that occurs in the spinal erectors when the spine rounds beyond a certain point).  Along with throwing an immense amount of pressure on the disks which can cause a posterior disk herniation due to the assymetrical stresses thrown across the nucleus pulposus (the squidgy part; yes that’s a technical term) of the disk.

And THIS is what the majority of folks arguing against rounding the back in the deadlift are generally talking about: the situation where a lifter is actually trying to keep their back flat but (for whatever) reason is not, going from flat to round-backed somewhere between the flat-backed start and end of the movement.

Sometimes it’s flexibility (though this usually prevents lifters from getting into proper position), sometimes it’s trying to pull too fast and ‘losing your shoulders’ behind your hips, sometimes it’s just weakness in the spinal erectors.  The cause is less relevant than the effect for what I’m talking about here.  I’m certainly not saying every argument is about this but I’d say the majority of anti-round-backers are talking about this situation specifically.

The Case For Round Backed Deadlifts

Now, look at the following video of one of the monster deadlifters of our time, Konstantin Konstantinovs.

Notice how he approaches the bar and takes a very deliberate round-backed position before actually making the pull.  It’s a bit hard to see here but only his UPPER (thoracic spine) back is rounded, his low back is actually flat.  Please contrast that to the picture above where it’s all rounded (like when a kitten stretches).

Now back researcher Stuart McGill has actually done some clinical work looking at this and actually shown that this style of deadlift is done with incredible neural control of the small muscles which stabilize the thoracic spine.

That’s along with showing that the thoracic spine is not actually flexed all the way (probably avoiding the weird inhibitory neural reflex that occurs to shut down the muscles and throw stress onto the ligaments and disk) when top lifters do this.  That is, it is a VERY controlled position without the thoracic spine in maximal flexion.

Interestingly, he actually managed to observe during a study an injury occur to the thoracic spine.  It happened when the lifter lost muscular control, rounded the one segment excessively, throwing all that stress onto the ligaments.  Which is exactly what happens when a lifter is trying to do a flat backed deadlift and rounds out after starting the pull.

It’s almost as if going from a controlled flattish position to an uncontrolled rounded position is bad which is generally what the anti-back rounded deadlift group is arguing.  Hmm…..

But THIS is what the pro-round backed deadlifters are generally talking about: the situation where a lifter is deliberately rounding their upper back but maintaining it with strong neural control (meaning they train and practice this) and NOT rounding the low back.  And has the technique, skill, strength, etc. to do it this way under control.

And that’s what I mean by the two groups arguing across one another: they are actually talking about totally different things.  The situation where a lifter is trying to maintain a flat back (clean grip style) and rounding out (and it’s always both his upper and lower back) is simply totally, unassailably different than the situation when a lifter DELIBERATELY rounds his upper back and maintains that rounding from start to (essentially) finish and vice versa.

The first is a failure of form (i.e. the goal is to maintain a flat back); causing a tremendous amount of stress to be thrown from the muscles directly to the ligaments which can potentially cause injury.  This is not a good thing to do which is why this group is effectively ‘right’ in their argument against round-backed deadlifts.

Basically they are both right; they just happen to be arguing about totally different things without recognizing it.  Which is a different way of saying that both groups involved in this debate should just get over it.  You’re each talking about different things and arguing across one another.