Before announcing my new book, I had detailed across four parts the first couple of month of my recovery from bipolar.  In those articles, I mentioned basically treating my training as coming back from a layoff.  Now for reasons I’m not entirely clear on, people seem to be fascinated with what my own training (and usually diet, which is insanely dull to talk about) look like.

Maybe it’s because I have spent a goodly amount of time talking previously about or they just want to stalk me, I don’t know.  But whatever, this is an easy update for me to make and that, above all, is enough of a driver for me to write it.  This details from start to about now what my (boring as hell) training has looked like in the weight room.  My other days are just various cardio days.   This is not going to be exciting stuff but will basically give a real-world example of how to come back from an extended layoff.

To be honest, since about 2012 when I retired from inline skating, my training has been fairly directionless.  I do better with a goal and haven’t had much of one since then.  Training has always been a part of my life and certainly I did stuff over the last couple of years but it wasn’t very focused.

I had done a bit of bike racing and I seem to recall being geared towards that at the beginning of 2014 but I did one race and that was it.  I just wasn’t interested.  I don’t know why.

Prior to the disaster in the second half of 2014, for some reason or another, I got interested in track cycling training.  Yeah, I’ve never ridden track (there are two velos in Texas) but it was interesting conceptually, sharing a lot of concepts with speed skating.  I’m not entirely sure what my goals were here but it seemed like something to do.

So for a while I did that.  It gave me an entirely new kind of training to learn about.  I got up my own butt with gear inches and how to train standing starts versus acceleration versus top speed and got the Kurt Kinetic Trainer with extra flywheel (which is a bear to spin up) since my powertrainer didn’t work well for that kind of training. 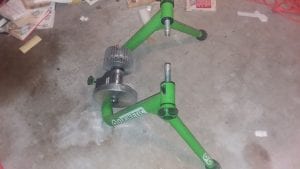 I’d warm up by spinning on rollers and I had two primary trainer workouts.  Monday was standing starts in a BIG gear.  Warmups to like 8X6″ from a dead stop and then 5′ rest spinning in between.   I’d go lift later in the day  Friday was an acceleration day, starting from 70-80RPMs in a medium gear and then accelerating as hard as I could for 6″, always in a smaller gear.  Weights in the afternoon.

I think I did one threshold workout on Wednesdays and everything else was easy aerobic work.  The week looked like this.

Weights were fairly basic heavy stuff.  Squats, RDL, leg press, leg curl and some upper body stuff.  Couple of sets of 5 and my legs were usually pretty wrecked from the bike work.  Standing starts in a big gear are like lifting on the bike and even accels are draining.

And that kept me busy for a few months until the disaster happened and I wouldn’t train for something like 5 months while that was going on.  Certainly I didn’t train in November or December, crushing depression kind of prevents that.

Coming Back from the Disaster

I’ve already talked about what happened after the crushing depression last winter and part of that was being advised to get back into exercise.  As I mentioned I was in Nashville and it was close, so I just got a Planet Fitness membership and went there.  And basically applied the advice I gave in Coming Back from a Layoff – Q&A to a tee.

Realize that, at this point, I really did not want to be at the gym in the first place, it was just something that needed to get done.  My fitness, work capacity, etc. were all gone and I knew that doing too much would make me want to quit.

As I recall the first couple of weight workouts took like 15 minutes.  I hit one set of like 12-15 reps with a very light weight in a handful of movements.  Leg press, leg curl, incline DB press, pulldown, shoulder press, row, arms.  Then I just did some cardio.  I vaguely recall adding a second set of a few of the movements into the second week but that was it.  It was just shaking out the cobwebs, breaking back in without breaking myself.

About week 3 of this, I was back in Austin and at my normal gym.  At this point I was doing 2 or 3 sets of 15 in the same handful of exercises and had been increasing the weights little by little.  By like the 4th or 5th week I think I was doing 4 sets of 15 and at that point I switched to 2 sets of 15 but with 2 exercises for most bodypart (so incline DB press for 4X15 became incline DB press for 2X15 and flat DB press for 2X15).  Towards the end of this it was really a mix of 12’s and 15’s depending on the movement and what I was in the mood to do.

The Next Two Weeks

At this point it was clear that my ability to progress in the higher repetition ranges had maxed out and I don’t like high reps in the first place.  The next step was to drop reps on the first exercise for any muscle group to 10’s and then follow it up with a couple of sets of 12-15.

During this time I also brought back in a barbell warmup before the other work.  My Gold’s Gym, for reasons obscure to me put in a lifting platform with power rack and bumpers and I figured I might as well add in some of that.  For years I’ve used pretty much the same bar warmup, all for sets of 5’s.

RDL, Powerclean, Front Squat, OHP to Push Press to Push Jerk, Good Morning, Back Squat, maybe a couple of back squats into BTN press and rest.  It was an easy way to bring in all of those movements to re-establish form, get stretched back out, and not feel too badly about the weights being so pansy since it was a warmup and like 30 total reps.

The Next Two Weeks

As the weights on the bar warmup went up little by little, I decided it was time to bring a bit more real training back into the fray.  So the bar warmup transitioned into a set of power cleans off the floor to front squats for 3+3 reps.  Then rack it and do a set of 8 back squats and a set of 8 RDLs.

Then go do my other training.  It was a small increase in volume and the sets were still pretty light.  I tend towards a lot of soreness and was trying to avoid that with a much more gradual break-in than I have used in the past.

The other major change was to mix up my upper body training a bit more.  So one day I’d do incline DB press/pulldown and then flat DB press/row with the second pushing and pulling exercises always sucking.  And on the other day I’d do flat DB press/row first and incline DB press/pulldown second with the second set always sucking.  This way each pair of movements got worked without fatigue.

Which brings me to the last 2 weeks of training.  I’m continuing to add weight gradually to the cleans, squats and RDL’s in dribs and drabs but had reached the point where even 10’s and 12’s weren’t progressing on the other stuff and I still didn’t enjoy them.   High reps suck.

At that point, I dropped the reps on the first movement of each muscle group to 3 sets of 8 (to keep total volume about the same) for the most part and followed that up with one or two sets of 12-15 on the secondary movements.  So it was a nice mix of both barbell, DB and machine movements, a mixture of reps, etc.

And that’s where I’m at.  My training is still completely goalless, it’s just working out to work out.  I don’t detest being in the weight room anymore (except for being surrounded by the typical Gold’s Gym peanut gallery) but it’s just something I do twice a week right now.

Eventually that will probably change but for now that, along with 2-3 days on the EFX is sufficient.  As the workload on the full body workouts go up, I might go to an upper/lower split of some sort.  Or I may not.  I’ll probably drop squats and RDL’s to 5’s in a bit but for now it’s still basically GPP and foundation type training.

And that’s the end of a truly pointless and boring article.  But now you know my training which, currently, is about the least exciting thing ever.  For those coming off a protracted layoff, it may give a bit more insight into breaking back in.  Like I said, this is basically my Coming Back from a Layoff – Q&A article applied to myself.

4 thoughts on “Returning From My Layoff”