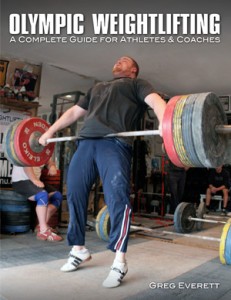 I must be out of the loop as I had never even heard of Greg Everett until he emailed me and said he wanted to send me a copy of his new book. Which he then did. And for which I thank him. I love books and I love good books and his is a good book.

Olympic Weightlifting is not a sport that has nearly as much written about it as say, powerlifting or bodybuilding, at least not in the U.S. Outside of the Russian Translations (which are often very difficult to parse) from Sportivny Press, the two primary books out there are Arthur Dreschler’s Encyclopedia of Weighlifting and Tommy Kono’s Weightlifting Olympic Style.

I suppose I should also mention El-Hewie’s Essentials of Weightlifting and Strength training. While thorough, I found it nearly unreadable and I can’t say it did much to further my understanding of OL’ing beyond developing a great appreciation for the importance of hair style in lifting (you’d have to have read the second edition to know what I’m talking about).

Certainly other books exist but most are more aimed at using the Olympic lifts for sports performance or what have you than in looking at Olympic weightlifting from a competition standpoint.

Of the two books above, Dreschler’s encyclopedia is truly that. Even for non-Olympic lifters, it has information that is valuable for all forms of strength training. At something like 400+ pages, it is truly an encyclopedia. And while it examines every topic known to god and man about Olympic lifting, it suffers greatly from a lack of pictures demonstrating what is being discussed.

The complexities of OL’ing don’t really lend themselves to dense text descriptions but that’s most of what Dreschler has. I’d note that Dreschler did release a companion DVD to the book to examine some of the topics discussed.

In contrast, Kono’s book is far simpler to read and understand; while less comprehensive, I found that it made some concepts of OL’ing easier to understand than Dreschler’s book by using easier and simpler descriptions and cues.

While it’s nice to read about the details and that the average lifter may dip approximately 6% of his height during the jerk or have an average back angle of 37 degrees during the second pull of the snatch (or what have you), it’s equally possible to get so hung up on minor details that the big picture is ignored. Kono’s book is more big picture.

Which brings me to Greg’s new book.

I’d place Greg’s book somewhere between those two extremes. While certainly not as comprehensive as Dreschler’s (I’m not sure any book ever could be), it covers the sport of Olympic weightlifting in good detail.

Warming up, the lifts themselves, equipment considerations, learning the lifts, fault correction, assistance exercises, basic training programming, nutrition, competition, stretching and recovery are all addressed in a professionally published well written book. Let me take a quick look at each section.

The book takes a fairly standard approach to teaching the lifts moving from the top down. Various position and basic concept drills with PVC pipes are introduced to get the lifter used to basic parts of the movement before moving to a bar and more integrated exercises.

Tangentially, I’d note that two of the drills (the scarecrow and tall snatch/clean) I hadn’t seen before; I used them with one of my (few) trainees and they did more to get her going under the bar than anything else I’ve come across. Had I paid for the book, that alone would have made it worth the price.

Perhaps the biggest strength of the book here (compared to say Dreschler’s) is that each exercise is accompanied by a sequence of photos showing what the lifter is actually doing from start to finish.

This goes towards making the text descriptions much much clearer. And while I expect most would argue that video is still better, I’d note that full speed video of OL’ing can be just as tough to understand as nothing at all: it all happens too fast to really see what’s happening.

Proper positioning of the lifter (e.g. feet, etc.) are covered in good detail along with guidelines for how to make adjustments for individual athletes and body lengths. As noted, the lifts are progressed from the top down eventually moving to the full lift from the floor. The drills progress logically from one to the next.

The same goes for the section on assistance exercises, each one is covered as needed along with pictures to demonstrate what’s being done and most of the ‘standard’ assistance movements are covered in detail. Various core and supplemental stuff is also addressed.

I’d note that, from time to time, Greg (can I call you Greg) seems to get a bit carried away with using technical terms where they probably aren’t necessary. Reading three paragraphs about how the elbows are supposed to move around the bar during the catch for the clean is likely to confuse as much as it clears things up.

The section on fault correction addresses some of the more common faults inherent to the lifts in general and each lift in specific along with common causes and corrections for each.

Perhaps surprisingly, the training section may be the weakest part of the book. Some basic concepts are covered in terms of training ideas along with some templates for beginner, intermediate, mass gain and advanced athletes but beyond that, much of the theory of Olympic lifting training (which, as Dreschler proved can take quite some time to cover in detail) is left out.

Sequencing of the lifts within training workout or the week or even exercise selection isn’t really discussed at all except by the sample workouts. Again, this topic could be a book in its own entirety.

The nutrition section covers the basics and while I certainly don’t agree with everything that Greg says (e.g. Gary Taube’s contention that insulin is what makes us fat), that’s neither here nor there.

Stretching and myofascial release along with basic recovery considerations finish out the book. Again, pictures accompany everything.

Overall, I was extremely impressed and pleased by this book. It’s well written although, as noted above, Everett gets a little bit too over the top with technical details from time to time.

The book presents a logical method of learning the lifts (inasmuch as they can be learned from a book without hands-on coaching) and the information is solid and thorough.

Anybody looking for an excellent examination of competitive Olympic lifting would do worse than to have this on their shelf.

Olympic Weightlifting: A Complete Guide for Athletes and Coaches can be ordered from performancemenu.com for $34.95.

I’d note that there is also a DVD seminar held by Greg available from the same site. I ordered it yesterday and will try to review it after I’ve gotten it.  Read my review of Greg Everett’s Olympic Lifting DVD Seminar.

I suspect that having the DVD to demonstrate the drills and learning progression along with the book would be the best combination for someone trying to learn the lift on their own. While that will never take the place of hands-on coaching, it’s a step in the right direction.

You can probably guess what today is going to be about by the title alone; read it all anyhow. Now,...

Yup, Bastrop again. Because between the drought and the heat and everything else, Austin can become a tinderbox and shit...