So the first ‘criticism’ of the new hip thrust vs. back squat for glute growth paper has shown up. It is by Pete Holman (who?), who claims to have 30 years in the S&C field (and who listed his FICTION book CRUZ in his letter as a truly lame appeal to authority).

While he does appear to have that many years in S&C based on his bio, I don’t think he’s been paying much attention because his comments are gibberish.

I address his 5 rather nonsensical criticisms in this video. They are

1. The small number of subjects
2. He thinks a 140 degree knee angle is INSANE. Assuming that these women MUST have been trained OL’ers and Pl’ers
3. That load wasn’t equated between movements
4. A bunch of gibberish about specific situations where someone might not be able to squat
5. A bunch of qualifications that while the squat might be better for elite OL’rs and PL’ers (still his asinine assumption from point 2), this doesn’t negate the benefits of the hip thrust. Nobody said it did.

Remember folks: the easiest argument to win is the one only you’re making.

Because this is just desperate.

And no I am NOT going to do this for every asinine criticism.  I just needed content and didn’t get my article done. 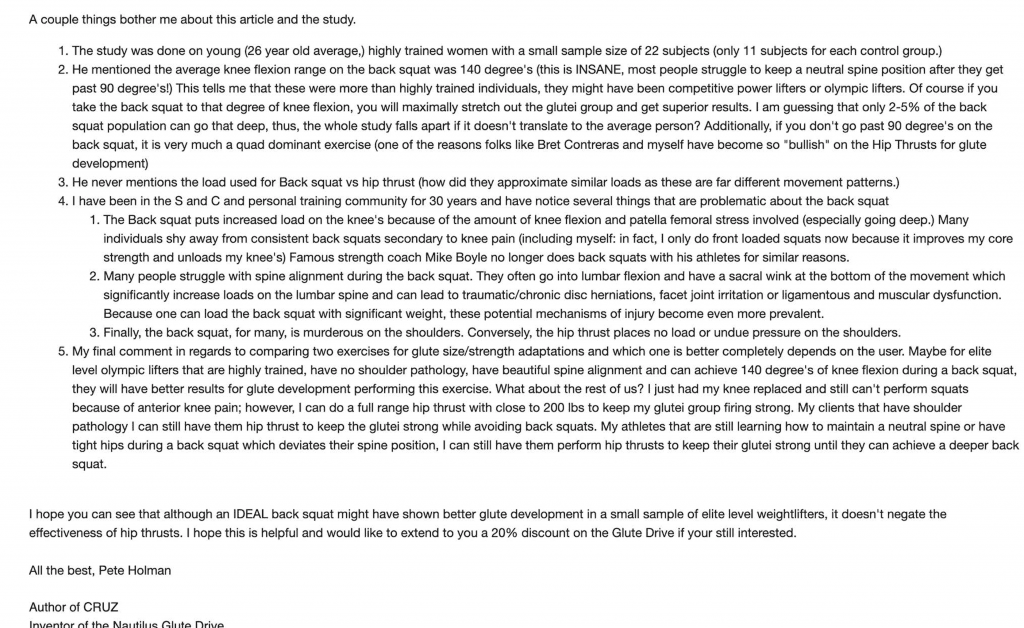 Is the Hip Thrust Better than the Back Squat for Glutes

The Glute Guy, Bret Contreras has built an entire training industry based on his claim that the hip thrust is...