Since I am flummoxed (yes, flummoxed) at what to write about this week, I’m going to address something in brief (for me) that came up on my Facebook group which has to do with the role of soreness, or more accurately delayed-onset muscle soreness (DOMS) and growth.

This has been one of those ideas floating around for years and I still see posts about people feeling as if they didn’t have a good workout if they don’t get DOMS or actually chasing DOMS.  That is, based on the belief that DOMS equals growth, DOMS becomes the end-goal.  When growth and progress should be the end goal.

This led me years ago to develop what I call the Blunt Force Trauma Theory of Hypertrophy.  Since you want to be sore, I will beat you with a hammer all over your body.  Growth should ensue.

As the name suggests, DOMS refers to or at least is thought to represent the delayed muscle soreness that occurs after training.  It’s frequently seen in beginner trainees (with something called the repeated bout effect causing it to dissipate fairly quickly) and after eccentric training of various kinds.

By eccentric I mean lengthening contractions, when your muscles are lengthening under load.  Lowering a weight that you’ve just lifted is one type but there are others.  Running downhill is notorious for causing DOMS and this is due to the muscles lengthening during impact under heavy load.

The phrase delayed-onset has to do with the fact that DOMS typically doesn’t hit until ~24 hours after training peaking at 36 hours.  For years people believed (and some still do) that lactic acid produced during exercise was the cause of DOMS>

The fact that DOMS peaked this much later made it clear that it wasn’t: lactic acid (or whatever, it’s more complicated than this) dissipates about 30 minutes after training.  No way could it be relevant 36 hours later.  I was taught this in the early 90’s and it stuns me that people still hold to the idea that lactate is relevant in any form or fashion.

When biopsies of muscle were taken after eccentric training (often downhill running, a special bike that forces an eccentric contraction or insanity like 10 sets of 10 maximal eccentric reps), there is often damage to the normal structure of the muscle.  Aha, eccentric equals muscle damage equals DOMS equals growth.  So chase that DOMS, right?  No.

Because when you sit down to think about it, not only does DOMS tend not to indicate growth, there is often seemingly an inverse relationship between DOMS and growth.  Four things to think about.

Basically, the above seems to indicate that not only is DOMS not associated with growth but in most cases you get better growth with less DOMS.   Yes, these are purely anecdotal observations but they are very very common.  DOMS seems to have no relationship to growth on most levels.

Once it was made clear that lactic acid wasn’t the cause, studies then found that DOMS seemed to be related to actual damage to the muscle.   And in that eccentric training is known to cause some degree of muscle damage and growth, the implication was that this was related to DOMS.    And this may or may not be the case.

When it was examined under a microscope, there was clear evidence of cellular disruption, things like disrupted Z-streaming and others.   Newbie marathoners often exhibited the worst DOMS, taking up to 6 weeks to recover completely (many report having to walk down stairs backwards after their first marathon, their muscles can’t support them).  Boom, you want growth, go run a marathon and rest for six weeks until the soreness goes away.. Wait…

The idea that DOMS is due to damage is being questioned in recent years and it’s being reconceptualized as more of a remodeling thing.   This is really a semantic issue to be honest.  And the idea that DOMS might be related to the remodeling of a muscle would still seem to implicate it in the growth response.  Except for the observations above where in the real world there seems to be no real linkage between DOMS and growth.

And while most research has found that a combination of concentric and eccentric (lifting and lowering) is superior for growth, some work finds that concentric only work can do the same so long as training volume is equated.

As well, researchers aren’t usually examining growth per se but rather things like the inflammatory response in terms of things like cytokine release, macrophage infiltration and others.  And this too is highly variable but seems to depend on the degree of damage.

And while some degree of muscle damage/inflammation may be necessary to stimulate remodeling (though it’s not always associated with DOMS in the first place; refer to the above 4 points), too much, requiring a week or more to recover strength can be so severe that it causes fibers to under go cell death (Skeletal Fiber Necrosis which would be a fantastic name for a death metal band).

Some is good, more is not better and too much may be awful.  Chasing DOMS to the degree of needing a full week to recover is probably doing more harm than good.  At the extreme, think Crossfit, a muscle can become so damaged that a cascade occurs that causes rhabdomyolysis. 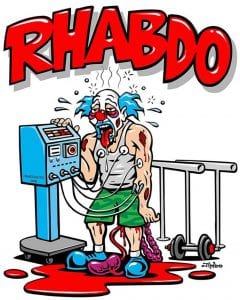 Yes, this is very rare (even if Xfit has managed to cause it more than just about any other training type) but indicates how too much damage is worse, not better.  There is a concept called an inverted U does-response curve.  Too little is bad, too much is bad, and there is a sweet middle spot.  This holds for everything including any possible effect of muscle damage on growth.

Other Problems with DOMS

Now, did you ever wonder how scientists measure DOMS in humans?  Basically they do it this way: first they cut a chunk of muscle out of someone.  Then they train the hell out of them using terribly extreme types of exercise.  Downhill running is a favorite, backwards cycling on a special bike that makes it feel like muscles are tearing, and stuff like 10 sets of 10 maximal eccentrics are used.  Then they cut another chunk of muscle out and compare it to the first chunk.

Wait, they cut out a chunk of muscle?  Yes, this is called a muscle biopsy and do not click this link if you are squeamish.  Basically they use a special tool with a little Pac Man looking thing on the end to cut a chunk of muscle fiber out.

But they have to do this at least twice and due to a frequent lack of control subjects it’s been suggested that  what is seen as muscle damage may be due to the biopsy itself.  That is, the actual cutting multiple chunks out of the same muscle may be causing the damage seen.  You can prove this to yourself, take a pair of scissors, have a stiff drink and, you know what, don’t do this.

The point being this: in the real world, not only does DOMS seem not to be associated with growth, it almost seems to be inversely related to it.  People who get less DOMS due to higher frequency training usually grow better than when they destroyed their muscles once/week (potentially causing fiber death instead of remodelling) and got tons of DOMS.

Some people get DOMS, others do not, there is a big individual difference although I couldn’t tell you what causes it.  But chasing DOMS for the sake of DOMS is just masochistic silliness.  The goal of training is progress, not being tired or sore.  I can beat up anybody in the gym, I mean make them limp out exhausted and be sore for a week.

But that rarely makes them better.  It just makes them sore and tired. And I can accomplish that with my patented hammer ™ and save them a gym membership.

As a trainee, your goal should never be soreness but progress.  So stop chasing DOMS.  It doesn’t mean anything.