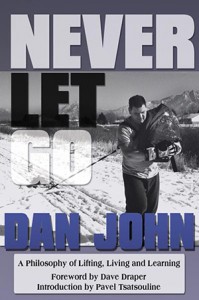 When I heard from a friend that Dan John had a new book coming out, I went and placed my order right away.  Unfortunately, that backfired as Laree Draper (wife of Golden era Bodybuilder Dave Draper) had already intended to send me a copy as part of being on the insider list.  I couldn’t have been more excited.  This is a review of that book.

For those who don’t know of Dan John, well it’s your loss.  Truly a more friendly, knowledgable and helpful individual in the field of strength training may not exist.  Dan is located here in Salt Lake City (where I am) and while I’ve only had a chance to hang out with him sporadically, it’s always worth the time.

You see, Dan John has been in the lifting weights since about the history of recorded time.   He’s seen it all, done it all, and tried it all.  His knowledge and experience is encyclopedic; coupled with his willingness to share that information with anybody who cares to show interest….well that’s a good combination.

Which brings us to Dan’s ‘new’ book. I put ‘new’ in quotes since the majority (if not the entirety) of the content actually consists of articles that Dan John wrote for Testosterone.net.  Again, this isn’t a bad thing either since his content is usually pure gold (and always seemed out of place on that particular site).  I may not agree with everything Dan has to say but I’ll read every word and it never fails to give me something to think about.

Now let me say upfront that Dan’s content may not strike a chord with those who think that the only useful training is based upon the most modern discoveries in neural physiology or molecular biology; that’s not who Dan is and that’s certainly not what Dan writes about.

If that’s the case and you don’t get this book, it’s your loss.

Altogether we get so fixated on what’s new and/or ‘cutting edge’ (and make no mistake, I’m as guilty of this as everyone else) that we forget our history or the fact that guys got very big and very strong with the simplest of workouts and training objects long before any of the science was around.

That’s what Dan writes about.  As I noted above, he’s been in the trenches for nearly 4 decades and has literally tried, seen and done it all.  His approach to training may not be ‘cutting edge’ but it works which is why a lot of people fly into Utah to learn from and/or train with him.

Anyhow, enough kissing of Dan’s expanding butt, on to the book.

As I noted above, the book is essentially a collection of his articles from Testosterone.net.  For all I know, every article is from there.  I had seen several of the pieces before but many were new to me.  When I received the book, I plowed through it in about 3 nights. I’m sure I’ll read it through cover to cover again to catch any gems of insight that I missed the first time around.

Each chapter is fairly short (for those of a short attention span) and they are all written in a nice conversational tone.  I’ve had dinner with Dan and he writes the way he speaks (or is it the other way around?).  Funny too, there are several laugh out loud comments in the book.

You’ll be exposed to all kinds of interesting ideas in the book, from the One Lift a Day Program to the Litvinov to a way to kill yourself with a PVC pipe filled with water.  Where else do you think you can find this type of information?  Nowhere is where.

For just about anybody involved in the field, I really can’t recommend this book too highly.  For those who are old and jaded like me, Dan may give you an insight into some decidedly old school approaches to training that flat out work.

And for those newbies who are killing themselves with the most complicated cutting edge computer generated training programs, learning about some very simple but effective ways of training may be just what you need.

To pad out the review, I’ve included the entire table of contents below, just to give you some idea of the breadth of the book:

Free Will and Free Weights ~ The Rule of Five ~ The Velocity Diet Experience ~ The Rest of the Story ~ The One Lift a Day Program ~ The Tabata Method ~ Fat Loss in Four Minutes ~ A History of Dieting ~ The Classic Top 10 Tips ~ Systematic Education for Lifters ~ 5 X 5 Variations ~ Three Mentors, Lifetime Lessons ~ Geezer Wisdom ~ The AIT Formula ~ Self-Evident Truths ~ What You Know Versus What You Do ~ PVC and Presuppositions ~ The Litvinov Workout ~ The Gable Method ~ Strong Eye for the Weak Guy ~ The Best Exercises ~ My Secret Coaching Methods ~ Nautilus, Crossfit and High/High ~ Blood on the Barbell ~ A Religious Studies Professor’s Review of HIT ~ New Associations, New Muscle ~ Coach Pain’s Slosh Pipe ~ Lessons from Southwood ~ Recovery Methods 101 ~ That Guy ~ Are You Making Progress? ~ Disdain Medium ~ The Big Five ~ Secrets to Long-Term Fitness ~ One Hard Thing ~ Principle Lessons ~ Three Basic Concepts ~ Goals and Toilet Seats, A Men’s Room Epiphany ~ Goal-setting for Motivation ~ The One-dumbbell Workout ~ The Journey to Excellence ~ The Philosophy of Physical Capital ~ Improve Your Fitness Literacy ~ Afterword ~ Suggested Reading

If you can’t get at least one useful idea (my criterion for a good product is that I learn one useful thing out of it, if I can say that it was a worthwhile purchase) from that list, then either you’ve been in the field longer than Dan and know everything there is to know already or you’re not paying attention.  Most likely the latter.

Finally, it’s worth noting (in this era of overpriced internet products) that the price is right.  At $24.95 plus shipping (for over 400 pages of content) from Dave Draper Online, the information to cost quotient is off the charts.

Even if you’ve read every article of Dan’s on T-nation, you should buy this book.  Dan is one of the good guys, I mean the really good guys and he deserves your support.  That’s on top of what you’ll learn from reading it cover to cover a couple of times.