AIM: The limited potential of exercise to induce weight loss could be partly due to the overestimation of the energy cost of exercise. The objectives of this study were twofold: 1) to investigate whether men and women are able to accurately estimate exercise energy expenditure (EE); and 2) to determine whether they have the ability to accurately compensate for the EE of exercise during a buffet-type meal.
METHODS: Sixteen (8 men, 8 women) moderately active (VO2 peak=45.4±7.7 mL.kg-1.min-1), normal weight (BMI=22.8±3.3 kg/m2) individuals, aged 20-35 years, were studied. They were blinded to two randomly assigned experimental conditions: a 200 and a 300 kcal (measured by indirect calorimetry) exercise sessions that were performed on a treadmill at the same intensity (50% of VO2 peak). At the end of each exercise session individuals were asked to estimate EE of the exercise sessions and to then eat the caloric equivalent of their estimated exercise EE from a buffet-type meal.
RESULTS: Estimated EE was higher than measured EE for both the 200 kcal (825.0±1061.8 vs. 200.1±0.7 kcal, P<0.05) and 300 kcal (896.9±952.4 vs. 300.2±0.7 kcal, P<0.05) sessions. Further, post-exercise energy intake was higher than measured EE for the 200 kcal (556.8±204.4 vs. 200.1±0.7 kcal, P<0.001) and the 300 kcal (607.2±166.5 vs. 300.2±0.7 kcal, P<0.001) sessions. Although post-exercise energy intake was lower than estimated EE, no significant differences were noted.
CONCLUSION: These results suggest that normal weight individuals overestimate EE during exercise by 3-4 folds. Further, when asked to precisely compensate for exercise EE with food intake, the resulting energy intake is still 2 to 3 folds greater than the measured EE of exercise.

Several years ago, a friend of mine (who now is of the two folks who runs Grassiron personal training here in Austin, look them up if you’re in town and want coaching) related a story of a phone conversation she’d had.  A girl had called and wanted to know how much exercise it would take to burn off a bag of M&M’s (calorie count about 270 calories).  When my friend told her the realities of it, the person asking the question apparently got annoyed and then outright angry about it.  Basically, she didn’t want to hear the reality of just how much activity it would take to burn off an exceedingly small amount of candy.

In a related vein, and this is something I’ve discussed in other articles on the site, it’s not uncommon in the least for people to drastically sabotage their own fat loss efforts by drastically overestimating the caloric expenditure from activity.   Folks will do an hour aerobics class (which really amounts to about 45-50 minutes by the time you factor in set ups and stuff) and say things like “I must have burned at least 1000 calories, I deserve a hamburger and milkshake.”  Or things of that nature.

The study I want to review today actually wanted to examine two different, but related (and important) aspects of the issue I brought up above.  The first was the degree to which people over-estimated the actual caloric expenditure of exercise.  The second was the degree to which those same people compensated for the exercise bout in terms of how many calories they ate at a buffet type meal after the exercise bout.   They also wanted to see if there were any differences in macronutrient preference following exercise or between genders in terms of response.  Some psychological parameters were also measured but since no interaction with the actual results were found, I won’t detail them.

Towards that end, the study recruited 17 subjects (of which 16 completed the study; half were men and half were women) aged 20-35 who were ‘normal’ weight.  Body fat percentage ranged from 10% (the lowest male) to 42% (the highest female) who had only been moderately active (defined as no more than three hours exercise per week) and were weight stable for the past 6 months.

Subjects were tested for VO2 max (really VO2 peak, a distinction I won’t bother explaining here) and then put through two different exercise bouts at 50% of VO2 peak or about 65% max heart rate; this was done after they were all given a standardized breakfast meal.

The exercise was done walking and the subjects were prevented from knowing how long they had walked (no clocks or watches could be seen) or having any way of knowing how many calories they had burned. Following each exercise session, subjects were asked to estimate how many calories they had burned, an hour later (after a shower) they were asked to consume food from a buffet type meal corresponding to their estimated exercise energy expenditure.  The chart below shows the results. 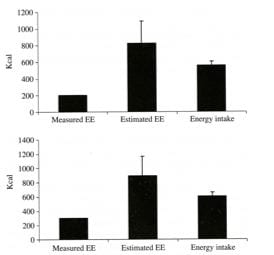 I’d note that the researchers found no difference in macronutrient preference for the 200 vs. 300 calorie bout (no big shock there) and there was no difference between genders in terms of the response.  I’d also note that, in the discussion, the researchers discussed some of the limitations of the study.  First and foremost it was done on ‘normal’ weight individuals; whether or not it applies automatically to the obese is therefore unknown though I’d be surprised if it didn’t.

As well, whether or not a similar effect would be seen for high intensity activity is also currently unknown.   It actually wouldn’t surprise me if the effect weren’t actually larger for people performing high-intensity activity.  Contrary to what people believe, things like interval training actually do not burn that many more calories than moderate intensity activity because the caloric expenditure of the rest intervals brings the total way down. As well, interval sessions are usually far shorter; often interval sessions burn fewer calories.  But I’m not getting into the details of this here, read the Steady State vs. Interval Training series for more details.

In the simplest terms, this study had two major conclusions one of which we already knew about.   The first, and the ‘novel’ (at least in scientific terms) finding is that the average person probably sucks as much as estimating the actual caloric expenditure from activity as they do at estimating their actual energy intake from food.

You can see this all the time on Internet forums, people throwing out values for an hour of exercise that are simply fantasies.  They simply don’t realize that moderate activity burns maybe 5-10 cal/min (higher if you’re VERY VERY fit) so if you get 600 calories per hour you’re doing well.   Again, if you’re very well trained you can get higher values than this but well trained people aren’t usually the population we’re talking about when we’re looking at major weight and fat loss.

A secondary finding of this paper is that people still suck at estimating their actual food intake.  That is, even with their guesstimate at their actual energy expenditure, they still didn’t get close to it with their food intake at the buffet.  Recall that the subjects were instructed to consume food to balance out their guessed energy expenditure.  And they were still several hundred calories off.

Perhaps more importantly, the amount of food eaten after the activity was threefold what was actually burned during the activity itself.  As I mentioned in the background section above, this is common; people come out of fairly moderate amounts of activity thinking they’ve ‘earned’ a zillion calories and more than offset what they burned during activity.

At least one interesting thing to come out of this study was the absolutely massive variation between subjects in their estimated energy expenditure (remember it ranged from 150-200 at the low end to 3000-4000 calorie at the high end) and the researchers write:

That is, perhaps the people who get the least out of exercise in terms of weight/fat loss are the ones who drastically overestimate how many calories have been burned.  This requires further testing although it would be eminently logical.

I should finish by saying that this paper shouldn’t be taken as more ‘evidence’ that ‘exercise doesn’t work’ (though I have no doubt that some will use it as such).  Rather, people need to be educated and informed about how many calories exercise can realistically burn.  And the realities are that, except for highly trained athletes, the value is much lower than most think, hope or expect.  And certainly far less than the average person estimates it to be.

Ketosis Carbohydrates and the Brain – Q&A

I've been doing the CKD effectively. However, I have a major exam on Friday. Is there any effect on limited...