For decades, dietary fructose has held an odd and controversial place in the realm of nutrition.    Some see it as a perfect sugar while others see it as the dietary devil incarnate.   Who’s correct?  To address the issue I want to examine the following paper.

Dietary fructose (“fruit sugar”) is one of three simple sugars that is found in the diet, the other two being glucose (“blood sugar”) and galactose (“milk sugar”).  As its name suggests, fructose is found primarily in fruit.  However, it also makes up one-half of sucrose (“table sugar”).  It is also roughly 50% of High-Fructose Corn Syrup (HFCS), discussed below.

Throughout the decades, the attitude towards fructose has gone back and forth.  Certainly for most of the 20th century, it would be a rare person who thought that fruit per se was unhealthy.  Yet in the 1980’s or so, bodybuilding coach and guru John Parillo stated that fructose made you fat and that removing fruit from the diet was important to get into shape.  The idea still persists today and many will be told to “remove fruit” from the diet when fat loss has stalled.

In the 80’s and early 90’s, fructose became a bit of a health nut craze.  This was during the heyday of the glycemic index.  It had been found that fructose had a low GI and thus become a sweetener of choice.  It probably still is.

Into the 2000’s, furor over fructose came to light again due to the issue of High-Fructose Corn Syrup (HFCS).  HFCS is found in many processed foods and especially sugary soda.  Early research suggested a link with the increasing obesity crisis and HFCS came to be demonized because of it.    Many felt that it was somehow inherently more fattening than other sugars outside of just providing excess calories to the diet.  This was, of course, nonsense.

Despite the fact that HFCS is more or less indistinguishable from table sugar, it kicked off a tremendous amount of research into the intake of pure fructose.  Nevermind that most people outside of health nut communities don’t eat pure fructose or that large amounts cause stomach upset, this is where the research focus was.

And certainly some research showed that high fructose intakes could cause a number of metabolic dysfunctions and effectively lead to the metabolic syndrome.     But frequently the fructose feeding studies were just insane and lacked what is called ecological validity.  That is, they had no real relationship to real world intakes.  Intakes of up to 300 grams of fructose per day were commonly given and this simply has no bearing on real world intakes.

Humans can’t consume pure fructose in large amounts with stomach upset.     So large amounts of fructose are invariably coming from high intakes of sucrose or HFCS.  As both are only half fructose, 300 grams of fructose would require roughly 600 grams (2400 calories) of straight sugar.

Even if it did, the average person consuming that much fructose would be getting it from HFCS.  As HFCS is only half fructose that would be a daily intake of 600 grams (2400 calories) of sugar.  We can all agree that that is unhealthy.

But I think we can also agree that, at that point, HFCS per se is not the problem.  I would also offer that people consuming that much HFCS in sugary soda is likely to have more than one lifestyle issue that is a problem.   Liquid calories are also handled very differently by the body than whole foods.

Basically, blaming HFCS per se or even fructose per se never made any sense.  They weren’t inherently fattening outside of their calorie value with certain forms of HFCS being very easy to overconsume.  In recent years, HFCS has actually declined.  Yet obesity continues to increase.  Almost as if it were a multi-factorial problem….

What About Smaller Amounts?

So there’s no doubt that utterly unrealistic amounts of fructose can cause metabolic dysfunction.  What about smaller amounts?  One of the earliest articles I ever wrote (or maybe got paid for) was on the topic and it’s true that the liver can only metabolize about 50 grams of fructose per day.

Above that level, more fructose is converted to triglycerides (TG, fat).  This seems bad.  I’d note that fructose intake (well, pure fructose intake) doesn’t raise insulin.  This is part of its supposed benefits in terms of the GI and diabetics.

But what this means is that fructose doesn’t inhibit fat oxidation after you eat.  So yes, eating a ton of fructose by itself may raise blood TG levels.  But the body is also burning more fat.  So it all cancels out.

But even here, we have a real-world question of approaching that level of fructose intake on a daily basis in the real world.  Because assuming someone is not consuming sugary sodas or lots of HFCS candy or foods, the only source of fructose that might be consumed is fruit.

As I mentioned, most of the above work was looking at absurd amounts of either pure fructose or HFCS.  But what about fruit?  To a degree, fruit became guilty by association.    As per the name, fruit contains fructose and hysteria over HFCS (which mainly came from sugary sodas or candy) cause people to associate fructose with “bad”. Fruit got caught in the crossfire.

Because as so often is the case, people like to think in absolutes.  If HFCS is bad in absolute terms, and studies giving idiotic levels of fructose are bad, then fructose must be bad across the board.  If you dare consume fructoes or HFCS IN ANY AMOUNT, you’re done.  You’ve sold your soul to the devil, you’ll wake up fat, your muscles will fall off.  If Internet message boards are to be believed, letting the tiniest amount of fructose cross your lips is serious stuff.

But it’s critical to realize that fruit doesn’t actually contain that much fructose to begin with.   One medium apple contains about 12 grams of fructose. You’d have to eat 4 per day to get to the liver’s 50 gram limit.  Can it be done? Sure.  Will a piece or two of fruit per day get you there?  Well….

The final issue to consider is that essentially all of the fructose feeding trials were either at maintenance calories or, usually, above maintenance.  And this completely changes how nutrients are or might be utilized by the body.

Because while it’s clear that physiologically unrealistic amounts of HFCS/pure fructose cause a variety of problems, that doesn’t really tell us anything about fructose intake on a fat loss diet or how it will function.

Which is a long way of finally getting to today’s paper.

Today’s paper actually set out to address two questions.  The first was whether a calorie restricted diet that specifically restricts fructose would improve markers of the metabolic syndrome.  They also hypothesized that a diet high in natural fructose (From fruit) would be superior to one where fruits were limited.

Towards this end they recruited 131 subjects of which 107 finished the study.  All were obese with an average of 40% bodyfat and 80% of the subjects were women.  After determining the subjects baseline energy expenditure they were placed on meal plans of 1500, 1800 or 2000 calories.

Unfortunately, the subjects were not provided with their food which is a huge limitation (also a common one due to the cost).  Rather they were given meal plans and asked to record their food intake at least once weekly.  Please note that food self-reporting is insanely inaccurate and I’ll come back to this. Adherence to the diet was defined as at least 80% attendance for scheduled clinic visits

I’d mention that this is quite common.   In a dieting situation, the diet is almost irrelevant to the physiological changes that occur in metabolic parameters.  Effectively, weight/fat loss always improves them irrespective of how the diet is set up.  This is a point lost on many who look at the response to dieting and extrapolate that to a maintenance or high calorie situation.

Basically, weight and fat loss trump just about everything else in terms of the diet or intervention.   That doesn’t mean that same response will be seen when someone is gaining weight.

It’s important to realize that the overlap in total weight loss was enormous and it’s important not to read too much into the differences.  Some people in the high-fructose group lost more than in the low-fructose group and vice versa.  Only the average changes were different.  You can see this below. 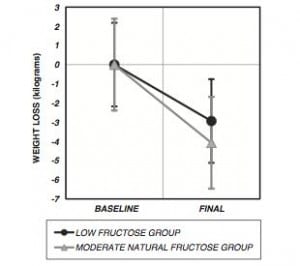 Both groups also reported an improvement in “quality of life”, whatever that means.

For weight loss achievement, a moderate natural fructose diet was superior to a low-fructose diet. Such a diet may offer greater benefits than other energy-restriction diets, as it does not entail the restriction of total carbohydrate intake and hence may be more sustainable.

Acknowledging this paper’s limitations, what does it say.  Well first it shows yet again that the presence of carbs in a diet doesn’t prevent weight or fat loss.   Both groups lost significant amounts of both and did it eating 55% carbohydrates.  Someone should alert Gary Taubes and Tim Noakes to this.

As well, at least in the population tested, the inclusion of moderate amounts of fructose from fruit caused no problems whatsoever.  All metabolic parameters improved in both groups with no real differences.  At least looking at weight loss, the moderate-fructose group did better although there was huge overlap an variance.  Certainly it was no worse than the low-fructose group.

On that topic, the researchers offered no real explanation given that the caloric intake of the subjects was supposed to be identical.  The suggest that perhaps the presence of anti-oxidants or other nutrients in the fruit played a role.  They also point out that the low-fructose diet had a higher glycemic load since the fructose had to be replaced by higher GI carbs.  I tend to doubt this played a role given the limit impact of the glycemic index on how the body uses fuel.

Rather, I suspect that the differences in weight loss are just a weird artifact of the study, especially given the relatively different changes in body fat percentage or waist-hip ratio.  Probably the biggest limitation of the study was the diet not being controlled.  This can lead to vast differences in dietary adherence.  All it takes is one or two outliers to pull up the average in one group.  Big picture, I doubt it was the fructose per se.

Irrespective of that, it certainly appears that the data on physiologically absurd amounts of HFCS/pure fructoes don’t seem to apply to limited amounts of fructose while losing fat.  At least not in a population of obese individuals who were predominantly women.

As I mentioned above, both groups showed identical improvements in metabolic parameters.   In no way did the moderate-fructose group do worse.  The idea that fruit  needs to be eliminated because it contains fructose would seem to be flawed, at least in this group.

Which raises the question of whether or not this would apply to leaner dieters.  That’s a question that this study can’t answer.   I’d only note in this regard that, purely anecdotally, many physique coaches have found that reintroducing fruit into a diet invariably ends up helping with fat loss.  That’s not research, just an observation.