The Nuances of Training to Failure: Part 4
(Let’s Add Frequency to the Equation)

So I’ve been literally overwhelmed by people sending me videos proving those absurd high volume workouts to failure can be done. Oh wait, no I haven’t because you’re all too weak to even ATTEMPT to prove me wrong.

Anyhow, Part 4 on the nuances of training to failure. Here I’ll add the Frequency component and talk about weekly training patterns to show how this all fits together. This is easiest done by looking at real-world training programs that have been used.

Finally to impress the guys at N1 I’ll look at the specific times when failure might be beneficial, ideal or even required along with times when it should be abjectly avoided. Nuance and context folks. I get it even if you don’t.

Still waiting for ‘Doctor’ Mike Israetel to correct his claim that I advocate training to failure for all people under all conditions. I’ll be waiting as long for that as for videos proving me wrong. Such big muscular insecure babies.

The Nuances of Training to Failure: Part 3
(Another Question and a Refresher on the FIT(V)T equation).

So at long last here is Part 3 talking about the nuances of training to failure. You’ll get a brief review of Part 2 and then another big question: Are these comparisons even relevant? Finally I will start the longer discussion of the real nuances of when failure might be good, bad or indifferent.

I’m still waiting for those videos of people doing either the Schoenfeld or Brigatto studies. I imagine I’ll be waiting a long time because you all know that they cant’ be done….and that I’m right.

Still waiting for Mike Israetel to publicly correct his “misrepresentation” about me advocating failure. I’ll be waiting even longer since he’d NEVER admit he was wrong even though he clearly is. An industry filled with cowards.

Just a quick little diversion from the series on the nuances of training to failure to ask a question.

So the same fitness ‘professionals’ who prattle about how training to muscular failure is so bad take a lot of research studies at completely face value (because they support the current higher volume is superior bias) without seeming to realize or recognize that the supposed workouts in the studies completely contradict the idea that tarining to failure is detrimental.

So I ask the question: assuming these study workouts are even possible to complete (hint: they aren’t)…is training to failure bad or are these research studies valid.

It can’t be both.

Note: I am not advocating training to failure. I am asking supposed fitness professionals to explain a rather large contradiction. Not that I expect that explanation to contain anything tangible. Somehow it never does.

The Nuances of Training to Failure: Part 2

So continuing from yesterday, I want to keep talking about the nuances of training to muscular failure that nobody but me seems to bring up.

Today I’m going to bore you to tears by looking at 4 specific papers, 3 from the Pelland review and one brand spanking new one.

Then I’m going to ask a couple of fairly simple questions about this data set to wrap it up.

The Nuances of Training to Failure: Part 1

Is it good, bad, or does it depend on the context and specifics?

Does it really generate more fatigue than not training to failure? Does the research being cited to support that idea really show that? Is it even relevant?

Stimulated by a trite little IG meme by the boys at #n1training I decided to talk about this even more.

In Part 1, I’ll make it abundantly clear what my stance on training to failure is, mainly addressing “Doctor” Mike Israetel’s lies about it. Perhaps the good “Doctor” will show some integrity and retract his statements. Hahahahahahahaha.

Then I’ll define muscular failure before starting to look at the research base on the topic.

So last week I did an overlong video about the current claim that the lats have NO leverage with the arm about 120 degrees of flexion. Well apparently I had more thoughts on the topic since here’s ANOTHER overlong video addressing more issues.

First let me make it clear that I unknowingly misrepresented what the guys at N1 were saying on the topic. I mention this in the video but, unlike most in the field, like to own my mistakes. So what I am really focusing on is Chris Beardsley’s article which is what many seem to be taking as gospel.

In any case, this video has a bunch of boring background about torques and lever arms, then I look at the Ackland and Kuchle data again before getting deep into the biomechanics of the shoulder girdle and addressing part of this issues that nobody seems to be talking about (HINT: THE TRUTH WILL SHOCK YOU).

The Lats Have NO Leverage Above 120 Degrees…Or Do They

So in a rare fit of producing actually topical content, I wanted to address an idea that I’ve been seen moving across the social media sphere. Specifically I want to address this recent absolutist assertion that the “Lats have no leverage above 120 degrees of flexion”, or however exactly the Internet Fitness Industry Brain Trust is putting it.

I’m not 100% sure where the idea started although I suspect that Chris Beardsley’s article on training the lats is where. It’s being reiterated by many including the guys at N1 and someone called Lift Run Bang or some such.

Note: the tough “discourse” with Mike and Lift Run Bang is on Mike’s secondary account. Expand the comments here

Anyhow his typically detailed style, Chris examines a host of data about the lats including a section where moment arms of the lats are analyzed. In it he examines data suggesting that only the inferior (lower) portion of the lats has a lever arm of note at this point in the movement.

This is being used to argue that any lat movement with the shoulder above that point isn’t utilizing the lats.

But is it true? Or rather, is the issue a bit more nuanced that the typical trite IG meme or short video would suggest. Guess.

In this overlong video, I look at Chris’ article first and then the paper(s) from which the idea about the zero lat moment arm comes from.

Spoiler alert: the topic is more complex than people are making it out to be. But what’s new about that.

Links to relevant reserach and articles appear below.

Enjoy (or don’t) and Merry Holidays Everyone!

Link to Chris Beardsley’s Article: How to Train the Latissimus Dorsi
https://sandcresearch.medium.com/how-should-we-train-the-latissimus-dorsi-aed763cfd98c

Hik and Ackland. The moment arms of the muscles spanning the glenohumeral joint: a systematic review. J Anatom (2019)
https://onlinelibrary.wiley.com/doi/full/10.1111/joa.12903

They knew more about productive training than most of the supposed evidence based experts do now. 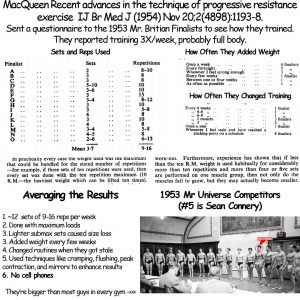