I wanted to give an update on Loretta today, so that everyone who was nice enough to donate to help her (and my other dogs) as outlined in Volunteering at the Austin Humane Shelter: Thank You will know what’s going on.

Friday, Loretta went in for her surgery.  I had actually volunteered to pick her up at the vets since it’s close to where I live but apparently she doesn’t like riding in cars and they didn’t want her to mess my back seat.  So shelter staff took her up in a van and brought her back.

And she’s doing wonderfully.  Her eye was removed and, like dogs who have a leg removed, she’s doing just fine.  Dogs are adaptable, they don’t have time to mope.  Her mange is also clearing up and her overall skin and fur condition is better.  She’s still under clinic watch, they’ve been trying to clear her of ringworm for a while.  But all in all she’s on the mend.  Which means that, before too long she’ll get moved from the Pre-adopt kennel (where dogs not yet for adoption are kept) to the K-9 Kennel.

And I have no doubt in mind that the first person who sees her and sees her lovingness and beauty will give her the home she wants.  And I wanted to say thank you again.  Without your help, this couldn’t have happened as quickly as it did.  If it had happened at all.

But I don’t want to say everything that needs to be said.  I visited Loretta today to see how she was doing after her surgery. And the answer is wonderfully.   We took her for a walk and I told her that I was going to wish everyone a happy holidays and Merry Christmas and say thanks but she told me that she wanted to say it herself.

Take it away Loretta. 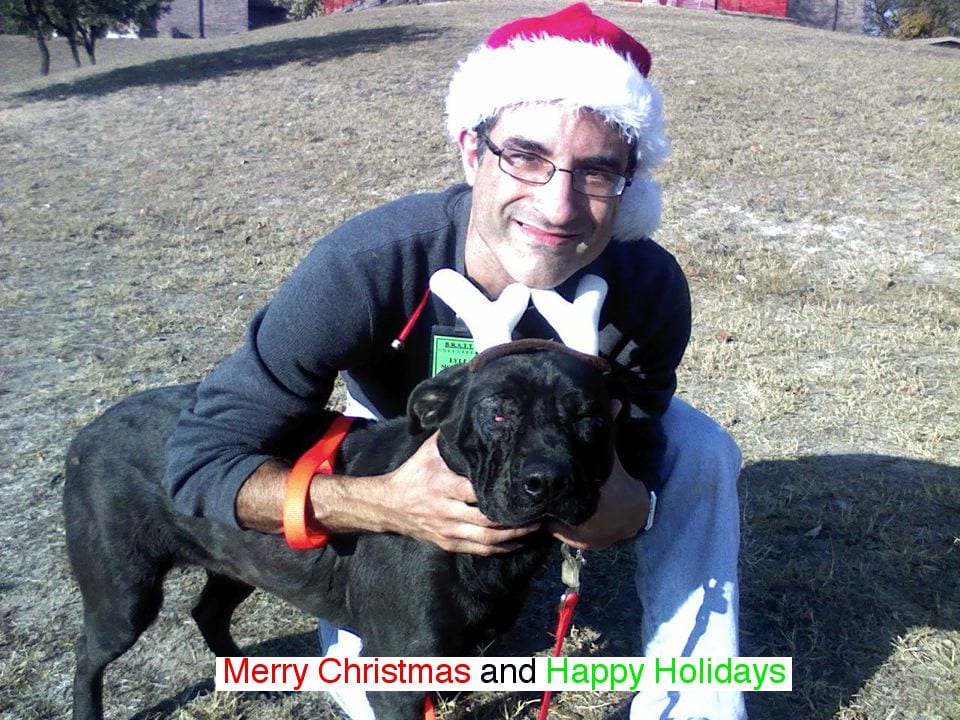 hai thiz iz loretta.  im not very gud at computerz but im just a dog and wanted to tri.  all i wanted for x-mas this year was to get my i fixed and u all made that happen with ur donationz.   the nice surgonz fixed me friday and im very happi.  my back is getting much better and the nice shelter people are helping me get well.  soon ill have my own family to love me and a home to liv in forever.  i hope u all hav a nice holiday with someone who loves u 2.  id lick u all if i cud to say thanx.  i hop this iz enuf.

Update: I just received the following email from Cyndi in Animal Care at the Shelter:

She ended up not having her eye removed. I know that was the plan at first but they actually did 3 surgeries on her eyes and it looks like its gone but her eye is there.

So that’s a double Christmas bonus.  Loretta got her surgery AND kept the eye.  Happy Holidays!

Loretta is Available for Adoption

I actually spent some time with Loretta the other day, Whitney had brought her in and we tried to get her into a playgroup with Rocco.  Unfortunately, Rocco wasn’t feeling quite up to snuff (he was coming down with an upper respiratory tract infection) or up to playing; they got along just fine.  She was just as lovable as ever.

Oh yeah, if you’re wondering why I’m recapping all of this, it’s not just me being wordy for the sake of being wordy.  Rather, it’s a spacing issue because of how I have the main page of the site set up; I’m trying to get enough text here so I can push the video onto the next page.

In any case, after many long months, Loretta is up for adoption.  She’s listed with the other dogs on the Austin Humane Society (second column, fourth dog from the top as I post this) website and there are several pictures and a video of her available.  I’ve embedded the video below, it shows how far she’s come since her first arrival, through her surgeries to now.

I have no doubt that she will be adopted in no time at all.  She’s currently in the foster to adopt program, that is she is staying with her foster mom but there is information about her in the main kennel.  I am told that she may spend some time in the kennel itself; there’s a big out of sight out of mind thing that goes on a lot of the time.  If the public can’t see the dogs, they don’t get adopted.

In any case, this will probably be the last full update for Loretta since the next one, which I anticipate happening very soon should be simple.  I’ll be happy to report that she was adopted and has found her Forever Home.  That was the goal for her all along and, once again, I want to thank everyone who helped.  This couldn’t have happened without you.

Loretta Has Her Foster Home

Today I was sent this via email and a special Austin Humane Society Newsletter that Loretta is currently out of the shelter and staying in a foster home.  Volunteers often foster dogs to get them out of the shelter temporarily.  Once again, the donations that my readers gave contributed to this and the following appears on the Austin Humane Shelter’s webpage about Loretta:

Thanks to donors like you, young Loretta has a new lease on life and it certainly is turning out to be a happy one! You may remember Loretta as the sweet, but very sick dog, who we rescued from an uncertain future at Town Lake Animal Center after she was found abandoned on two couches on a rural road (you can see pictures of her when she first arrived to the right). Since you first met Loretta, she has certainly come a long way!

Thanks to your donations, we were able to fund extensive skin treatment and two eye surgeries to cure Loretta of her ailments. Now her skin is almost healed and she has successfully completed her first eye surgery, and it is clear that she is extremely thankful! Please watch the video below to see just how happy Loretta truly is to be feeling better and living in a loving foster home!

Loretta still needs a forever family, so if you think you might be the right fit for this sweet girl, please contact  fostercare@austinhumanesociety.org.

This is Lyle again: Looking at the video, I see no indication of what she’s gone through.  Her back looks normal, if her eye surgeries (again, she kept both due to the excellent work of the surgeons) are holding her back I can’t see it.  She’s just a great dog in need of an equally great home.

Once again, I want to thank everyone for their help.  Loretta is clearly an amazing dog; to have gone through what she went through and be this happy and playful is a testament to her.  And it couldn’t have happened without you.

Loretta Has Been ADOPTED!

Yes, I know I was supposed to do the second part of my race report today but tough; this is more important.   A few days back, I received the following in an email from the Austin Humane Shelter. 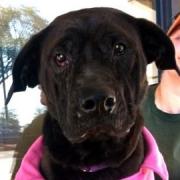 We had two longtime residents adopted this week.  Loretta’s journey involved many of us here at AHS, and began when she came to us with severe medical issues including skin and eye problems.  Thanks to generous support and attention from donors, staff, and volunteers, she is in her forever home.  It was a true team effort!  Miles had been with us for over three months and received countless hours of attention from BRATTS. We wish all the best for these two pups!

Miles is another dog who’s been at the shelter for a while so it’s good that he finally found his forever home.  I seem to recall being told that Loretta and Miles were the only two dogs we had left from 2010 who hadn’t found a home.

Honestly, I’m surprised it took as long as it did for Loretta to get adopted although the fact she was in foster was probably part of it.   Her foster mom, who has had her for the past several months didn’t want to put her back in the shelter though, which is fully understandable.  In any case, when dogs aren’t at the shelter to be seen they can be ‘out of sight, out of mind’ but finally someone has taken her home.

It’s been a long road to get here, from her initial intake, her multiple medical treatments, months in foster.  And now, finally she has a home where I’m sure she’ll be happy and the people who adopted her will be too.  Thank you again to everybody who contributed to Loretta’s treatment and who have been following her progress over the months.

So in ALFIE! Part 1, I gave a relatively quick explanation of how I went from digging a dog (ALFIE!)...